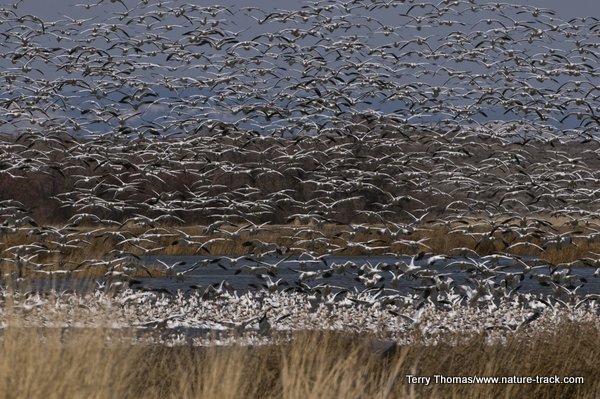 A snow goose blizzard at Market Lake WMA. Snow geese only visit East Idaho for a short time each year and the show starts soon. Be sure not to miss it.

Sunday’s snowstorm was a reminder that winter has not given up the fight. We are expecting another blizzard though that actually heralds the arrival of spring. This blizzard is coming from the south on 100,000 wings.

Snow geese typically arrive at eastern Idaho wetlands about mid-March. They push the migration envelope because they are in a hurry to get home to the Arctic where breeding occurs. This is a 3,500-mile journey for these geese who just vacated wintering grounds in New Mexico and Arizona. Air distance to our wetlands is about 750 miles from Bosque Del Apache or Imperial National Wildlife Refuges, and these birds arrive tired, hungry and ready to rest and refuel. Without essential stepping stones like the Great Salt Lake in Utah, Mud and Market Lake Wildlife Management Areas and Camas National Wildlife Refuge in Idaho, and Freezeout Lake in Montana, that provide the much needed rest, the story of these medium distance migrants might be much different.

There is a color phase of snow goose called a “blue goose” that has a darker plumage.   Usually, the head and neck are mostly white but the rest of the body is slate gray.  This color phase is common in the Mississippi and Central flyways but less common in the Pacific flyway.

Snow geese are beautiful birds, but their true magic happens because they like each other’s company. Snow geese pass through our area each spring in rather staggering numbers.  Flocks of one thousand birds or more, flying in loose V’s, U’s, and oblique lines stretch across blue spring skies and at their peak may number 50,000 or more. By the time the flyway consolidates further at Freezeout Lake near Choteau, Montana, they may join another 300,000 snow geese.

Watching a flock of thousands of snow geese take off or land is like being inside a shaken snow globe with sound effects. White birds whirl around, circling repeatedly with enough chatter to literally drown out a passing freight train. All you can see and hear is birds in a wildlife encounter sure to impress even the most jaded of souls.

Snow geese spend the nights gathered in huge rafts on open water. About sunrise, the chatter between them escalates rapidly. Then, as if on signal by a conductor, the entire flock seems to take to wing at once, rising, swirling and then finally lining out toward their feeding location for the day.

After spending the day feeding in grain fields from Highway 33 to Highway 20 west of Idaho Falls, they reverse the process, returning to the security of the water in a procession called fly-in. Fly-in is not nearly as truncated as fly-out, the morning process, but by dark all the snow geese are back for the night.

For a brief time each spring, snow geese will grace our skies. They will remind us of the wildlife abundance that once blanketed this country and, as surely as summer is green, they will trail springtime along behind them.