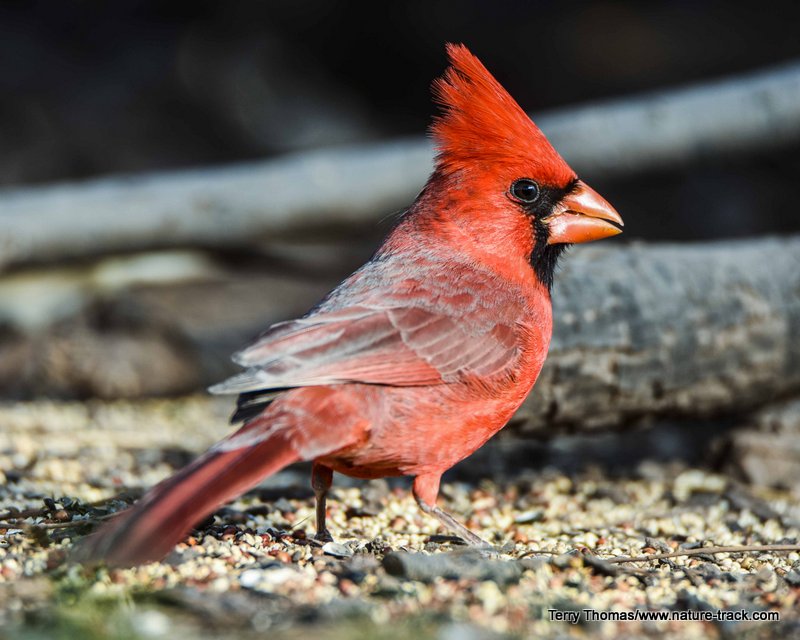 It is hard to imagine that seeing a Northern Cardinal could ever be anything but awesome. Sadly, the old saying, familiarity breeds contempt, is true unless we look for other things to appreciate about them.

Oblivious to the spines, a pair of cactus wrens busied themselves with making a nest in the fork of a cholla cactus in Organ Pipe Cactus National Monument’s Alamo Canyon. Cactus wrens were still relatively new to us and we enjoyed the show. A woman and her husband, obviously serious birders judging by their dress and expensive binoculars, stopped to talk.

“What have you seen?” she asked. We gushed on about the wrens, pyrrhuloxias, cardinals, black-tailed gnatcatchers, phainopeplas, Gila woodpeckers and Gambel’s quail along the trail. “I am from Arizona,” she stated matter-of-factly. “Those are my backyard birds. I’m here to see a crested caracara.” It was as if we had just spotted an elusive house sparrow or starling—our finds didn’t even evoke a, “Nice!”

I was disappointed several weeks later to find myself in the same situation. By now, cardinals, Gila woodpeckers, ladder-backed woodpeckers, Anna’s hummingbirds and more—had became passé, just another cardinal or just another Gila woodpecker. They were almost an annoyance in our quest for new or rarely seen species. Like the woman in Alamo Canyon, we wanted to see a crested caracara, a vermilion flycatcher, an elegant trogon or a violet-crowned hummingbird. We accomplished all of that and when we did, the excitement of a new species (the very first time I saw a male cardinal I nearly wrecked my truck) began to fade.

My wife is better in the excitement department than I am. Once she grabbed her binoculars and began describing a sparrow-like bird with a beautiful black eye-mask and throat, chestnut back and pale cheeks. It was like sticking a needle in a balloon when I suggested that she was describing a male house sparrow.

Why? Knowing it was a house sparrow didn’t change how striking it was. Despite their commonness and a few poor habits, house sparrows are handsome birds and their behavior can be fascinating.

I now realize that there needs to be more to birdwatching, or wildlife observation in general, than just a species count. Maintaining an interest in species goes well beyond simple identification. The key to never saying, “Oh, just another cardinal,” is in learning all you can about each species.

Learning bird songs is another excellent way to rekindle excitement about even the most common backyard birds. Most birds have unique songs and calls and being able to identify them can be an invaluable help in locating them and boost your enjoyment many times over. Birders working on a Big Year (trying to see as many species as possible in one year) can count birds they hear but don’t see. I have posted a recommended list of birds to start with (provided by a birder friend) on my website, www.nature-track.com.

It doesn’t take much imagination to stretch this into a life lesson. So often, even important things such as relationships, stale with increasing familiarity. Finding ways to maintain a fresh look on life should be job one. If you care to share how you do that, I would love to hear from you on my website.