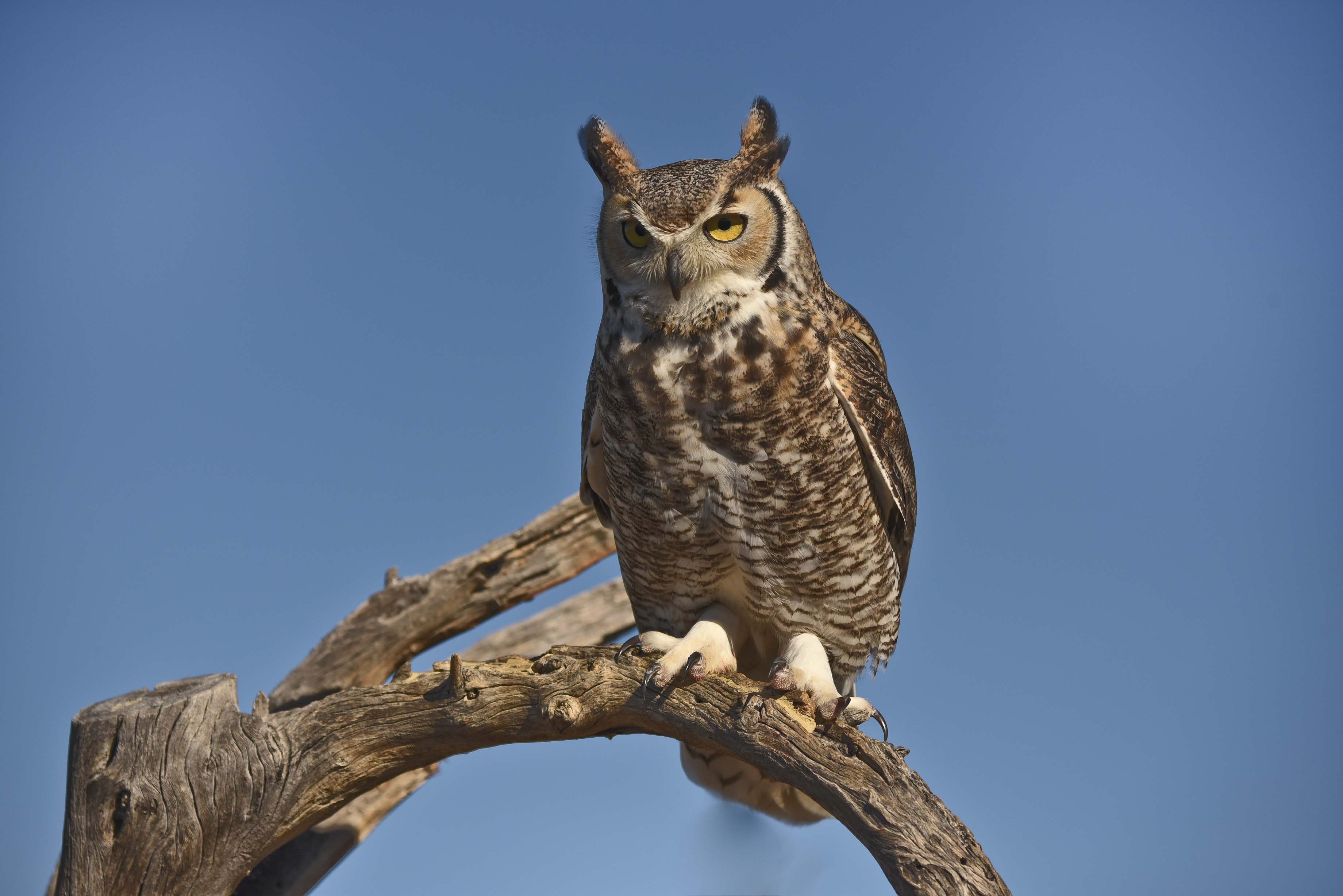 In its world, the great horned owl is a top predator and it will persecute all other owls that attempt to live within its territory.

The large pile of feathers at my feet once belonged to a long-eared owl; the size, barring and tawny color were unmistakable even if I hadn’t seen two other long-eared owls in the same area. It seemed strange though that this nocturnal predator could be killed and eaten by something.

Then I remembered the barn owls at Deer Parks WMU. The manager had alerted me to their presence in January but I was out of town. When I returned I gave him a call to check up on them. The barn owls were no longer around, he told me. Perplexed, I asked where they had gone. Well, it turned out that they hadn’t really left as he was finding bits and pieces of them scattered about; a wing here, a head there or piles of feathers like the ones I was now looking at. He said that the same thing had happened last year.

It wasn’t a disease, bad weather or simple misfortune that dispatched the barn owls or even the long-eared owl. There is another owl that claims these night skies and abides no trespass by smaller interlopers. The great horned owl is sovereign in these parts and all other owls that want a place at the table in their neighborhood eat there at their own risk.

The same is true for the dog world. I well remember watching three wolves lounging on the snow in Lamar Valley. They had eaten their fill from a nearby elk carcass and were just lazing about. That is until a pair of coyotes with far more temerity than brains, tried to grab a snack from the carcass. One of the wolves stood and stretched and the coyotes knew they had pushed their luck too far. They both were at a full run in seconds. One bailed off a cornice and escaped. The wolf focused on the other coyote, barked for his pack mates to join him and closed the100 yard gap like a bullet. The three of them bowled the coyote over and tore it apart in seconds.

Wolves don’t tolerate coyotes in their territory, something biologists documented in Yellowstone National Park shortly after wolves were reintroduced there in 1995. It didn’t take long for the new kings of the mountain to exert dominance over their smaller cousins. According to one researcher, within a year of reintroduction, wolves may have killed 25 percent of the coyotes in Lamar Valley.

Lest you feel too sorry for the coyotes, realize that coyotes play the same deadly game with their smaller cousins, the foxes. One Yellowstone study found that, “71 percent of interactions between coyotes and foxes in the Lamar Valley are aggressive, with 40 percent fatal to the fox.” And foxes would do it too, I’m sure, if they had smaller clan to persecute.

These are turf wars, not hunger-based killings. The sated wolves that I watched didn’t consume any of the coyote they killed, it was simply the equivalent of running a competing drug dealer off the block.