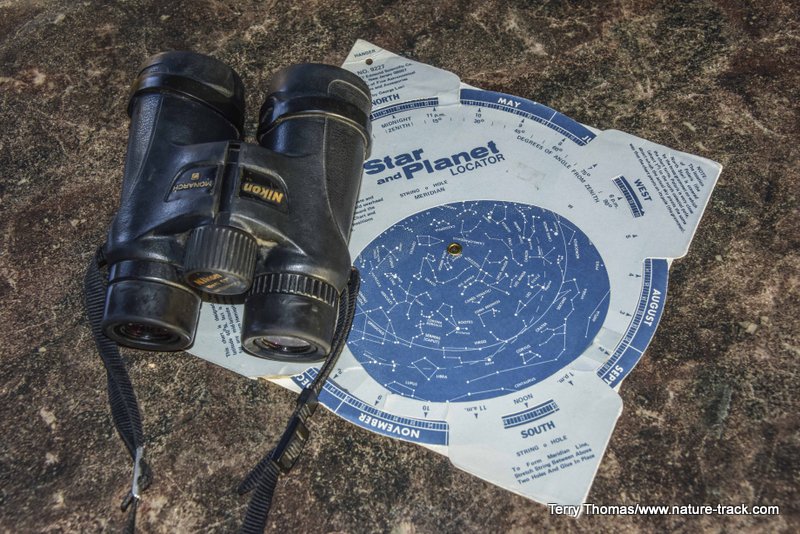 A planisphere and a pair of binoculars are all you need to get started with stargazing.

The Seven Sisters star cluster, a.k.a. Pleiades, is an easily found star group in the winter sky. It is located in the Taurus Constellation and the three stars that make up Orion’s belt almost point to it. With just a little light pollution though, this can be a difficult group of stars to see, and without an optical aid, the seventh star is seldom seen.

When talking about night skies, “optical aid” usually conjures up images of massive and expensive telescopes. However, Kitt Peak National Observatory issued us each an ordinary pair of binoculars at a recent star party and I was surprised at how much they helped. For instance, instead of a fuzzy cluster, Pleiades became a group of far more than seven stars, all clearly visible.

Several other tools will help you enjoy the night sky. The first is a headlamp or flashlight with a red lens. Why the red light? The rhodopsin in the rods of our eyes doesn’t flush out in reaction to red light like it does to white light. You can preserve your night vision and still see to move around safely.

An inexpensive planisphere is a must have. This is really a fancy name for a star chart or sky map. Since the night sky constellations you see appear to move as the earth turns (that is why a long exposure photograph of the stars shows lines or arcs instead of pinpoints) and as seasons progress, a planisphere has a couple of unique features. The first is that it is adjustable for the date and the time of night. By aligning the date and the time together, the planisphere shows exactly where everything is at that moment in time.

The other feature is that the sky on the planisphere rotates around the grommet in the exact center representing the North Star. The North Star is the only star in this hemisphere that does not appear to move and that is why it has been so important to navigation for millennia.

One other thing to know about planispheres is that they come calibrated to specific latitudes. The 45th North latitude circles the globe just south of Salmon, Idaho so pay attention to which planisphere you are buying.

If you have a spotting scope that you use for wildlife, it can be a handy tool for astronomy. The challenge is in finding what you want to look at in the first place. When viewed on a dark night through optics, the night sky has far more stars than you can imagine and pinpointing the right one can be problematic.

Astronomy laser pointers are the final tool. They cost from $20-50, use a green beam and are in the 503nm beam-width range (these are NOT toys! Keep away from children and pets!). They make it easy to point out stars and constellations to others. Strap one alongside your spotting scope and you have a simple way to roughly align it with the stars you want to see.

People are perhaps the best “tool” for learning the night sky. Consider contacting the Idaho Falls Astronomical Society at:  http://www.ifastro.org/ or visiting a planetarium. Both BYU-Idaho and The College of Southern Idaho have telescopes and planetariums free or at nominal cost to the public.

To induce you to look at the stars, I will leave you with one teaser: guess which major car company takes its logo from the Pleiades star cluster. Hint: it is also named for the cluster (in Japanese) and the answer is hidden in my bio below.

Terry Thomas is a wildlife biologist and naturalist. You can read more of his work on his website, www.nature-track.com, subaru or pick up a copy of, “The Best of Nature,” a collection of more than 100 of Thomas's best nature essays at the Post Register. Follow him on Facebook, Nature-track.