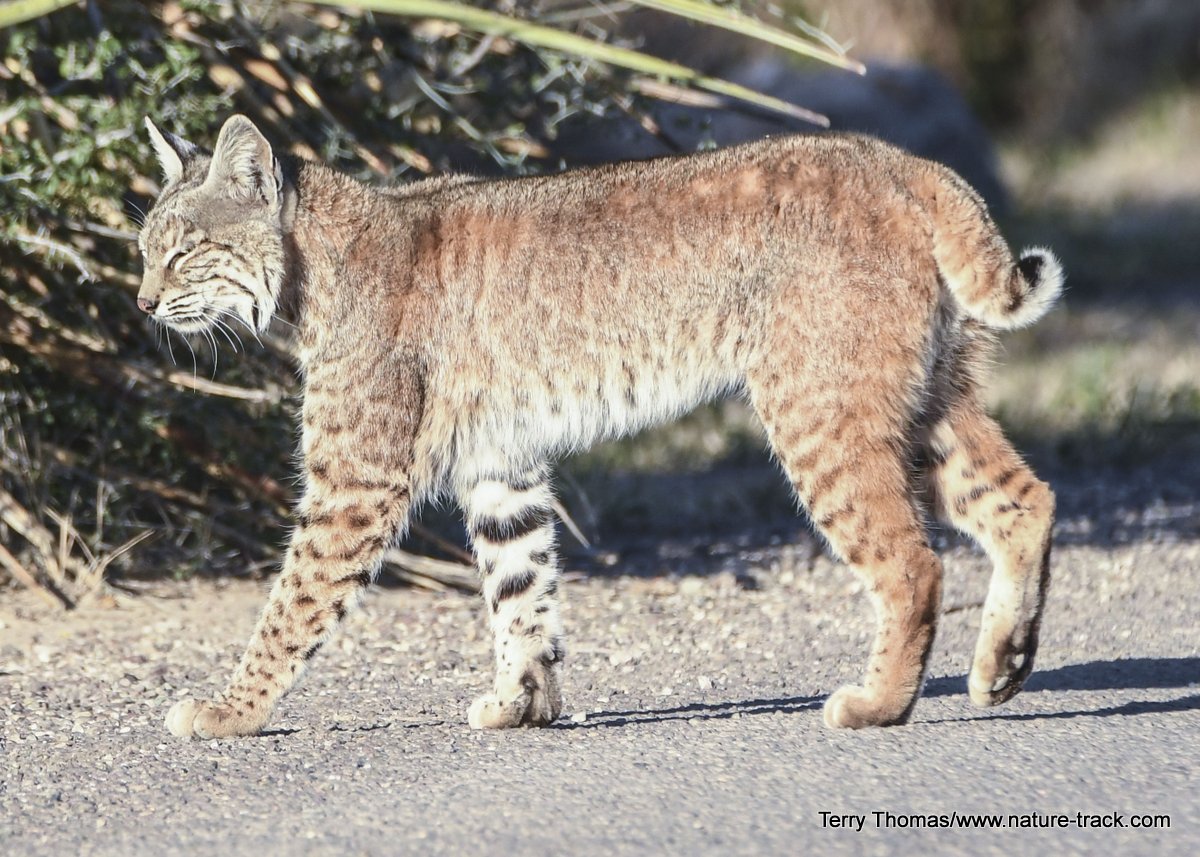 A bobcat is much larger than a house cat and has a spotted coat. Note that the underside of the tip of the tail is white, not black as with a lynx.

All thoughts of birds flew out the window as soon as we identified the animal in the road in front of us as a bobcat. We were cruising a dead-end road in Big Bend National Park in western Texas and birding was our objective. This park has many species found nowhere else in the U.S. and we hoped to see a few. A bobcat, though, despite being a common animal throughout the continental U.S. and Mexico, was a treasured experience. Most of my encounters with bobcats have been fleeting at best and this one was in no hurry to leave the warm early morning sun.

When I wrote about bobcats in 2006, I identified their scientific name as Felis rufus. As is so common with taxonomy, that name has changed as more taxonomists have come to agree that the bobcat is one of four members of the lynx family and should be properly named, Lynx rufus.

The other members of the lynx genus are the Canadian or North American lynx, the Eurasian lynx and the Iberian lynx. It would be natural to assume that the bobcat and the Canadian lynx share the closest relationship as they are most closely associated geographically today, but taxonomists say that isn’t so. The bobcat most likely evolved from the Eurasian lynx when it crossed the Bering land bridge during the Pleistocene. This population was cut off from the land bridge during the Ice Age evolving into bobcats about 20,000 years ago. In a later event, other Eurasian lynx again crossed the land bridge and eventually became the Canadian lynx.

All four lynx members and their respective subspecies have several things in common. All of them have a spotted coat, although the spotting is highly variable. They all have pointed tufts of hair that extend well past the end of the ears. They all have a short tail with a black tip, although the black on the bobcat’s tail doesn’t extend to the bottom of the tail like the other lynxes do. All species also have tufts of fur hanging down from their jowls, something like mutton-chop sideburns. This adds a lot of character and broadens the face, making the head look larger. The Eurasian and Canadian lynx as well as the bobcat have hind legs longer than the front legs which gives them a sort of swaggering gait.

The most interesting differences are in habitat and food preferences. Lynxes are specialists, strongly tied to forested habitats and abundant prey populations. They also specialize on one type of prey. For the Canadian lynx it is the snowshoe hare. For Eurasian and Iberian lynx, it is the European rabbit.

Bobcats are not so fussy. These amazing animals inhabit virtually every type of habitat that does not have deep snow. We saw them in the Chihuahuan Desert, but they occupy wetlands, woods, plains and other deserts across the country. About the only places they do not fare well in are large expanses of farmed land and cities.

And bobcats aren’t picky eaters. While they prefer a diet of hares and rabbits, small rodents, reptiles, birds and more are always on the menu. And, unlike lynx, a bobcat is willing and able to take larger game, up to eight times its body weight (a large male bobcat may weigh up to 50 pounds). I have seen videos of bobcats killing mule deer fawns. And a friend of mine did his research on bobcats that specialized on hunting white-tailed deer on an island in South Carolina to the point of being one of the main forces controlling the deer population.

Lynx may fade from our world (the Iberian lynx is endangered) as they aren’t good at adapting to change. However, as long as there is habitat of just about any type, we’ll have bobcats and that is a bit of good news.