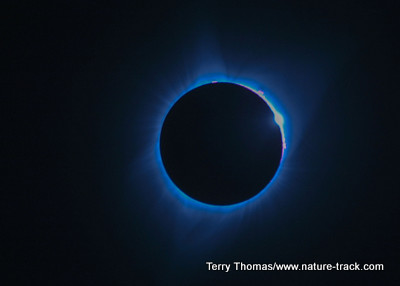 I forgot to post this column way back in March 2017. As a result, I am able to include my photograph of the total eclipse that occurred on August 21, 2017. It was an awesome experience. I hope you didn't miss it.

Our modern ability to understand the mechanics of solar eclipses and accurately predict occurrences for thousands of years in the future has diminished much of the mystique surrounding them.

Imagine though, how frightening eclipses must have been for ancient cultures when the sun, the giver of life on earth, began to disappear and day turned to night. Virtually every culture had its myths, often involving some animal (Korea-dogs, China-dragons, Vietnam-frogs, Norway-wolves, India-the demon Rahu) swallowing or chasing away the sun. The ancient Greeks believed that the gods were angry and that disasters were imminent.

Since modern earth-dwellers understand why eclipses occur, all that is left is gaining a better understanding of the phenomenon. To really appreciate eclipses, you need to learn a new language with hundreds of new terms to digest. I found though, that understanding seven words—the differences between shadow types and different eclipse categories—made me surprisingly conversant.

There are four kinds of eclipses: total, partial, annular and hybrid. During a total eclipse, like the anticipated event on August 21st, the moon completely covers the sun and only the aurora of the sun is visible. This is the ONLY time you can look directly at the eclipse without eye protection and it may last from a few seconds to a minute or two.

During a partial eclipse the moon partially obscures the sun. Depending on the degree of the eclipse, you may see a tiny sliver of sun or a significant portion of it. DO NOT look at a partial eclipse without eye protection.

The annular eclipse is really kind of cool. This is a total eclipse but the moon and the earth are at the extreme of their orbit. Therefore, the apparent size of the moon is not large enough to completely obscure the sun and during full eclipse there is a perfect ring, or annulus, of sun around the dark moon. DO NOT look at an annular eclipse without eye protection.

The hybrid eclipse is a combination of a total eclipse and an annular eclipse. Which one you will see depends upon where you are on the path and which shadow is dominating at the time.

There are three kinds of lunar shadows: umbral, penumbral and antumbral. The umbral shadow is the darkest part of the shadow. It is only within the umbral shadow that a total eclipse can be seen. This shadow is also known as the path of totality.

Because the sun is far larger than the moon, the umbral shadow is a cone with the point of the cone reaching the earth. This point of shadow is far smaller than the diameter of the moon itself. The path of totality is typically 10,000 miles long but only about 100 miles wide.

The penumbral shadow is the weaker portion of the moon’s shadow where the sun is only partially obscured. If you are outside the path of totality but can still see the eclipse in part, you are in the penumbral shadow.

Like most people on earth, I have never witnessed a total eclipse. Despite my enlightened vocabulary and knowledge of eclipses, When I see the sun disappear on August 21st, will some deep corner of my reptilian brain spark with fear when the normally dominant sun succumbs, even briefly, to the lesser moon?