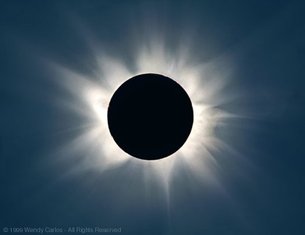 This  photo shows a total eclipse demonstrates that this once in a lifetime event is one not to be missed.

There is a lot of hullabaloo about the total eclipse of the sun slated for this August 21st. Estimates have the population of eastern Idaho bloating to as many as a million extra people for a couple of days. Hotel and motel rooms are at a premium, renting for ten times the normal fee. Renting backyards and spare bedrooms will be a new cottage industry for a couple of days and the traffic will be horrendous. All because the sun is going to disappear behind the moon for two minutes.

As one who has never seen a total solar eclipse, I have been a little amazed at the hype surrounding one. After all, there are eclipses happening all over the world. As I wrote this last weekend, an annular (not a total) eclipse, visible from the southern tip of Argentina, occurred.

Really, though, I get the rarity of the event in our backyard. The last total solar eclipse visible from the continental U.S. was on February 26, 1979. My wife of 38 years had just barely accepted my proposal for marriage then and I had eclipses of the heart on the mind. If you think that you might miss the August total eclipse and catch the next one, forget it. Astronomers calculate that it takes an average of 375 years for an eclipse to cycle back through the same location.

During the 21st century there will be 224 solar eclipses, but from 1999 through 2060, there will only be 40 total solar eclipses anywhere in the world and the next one visible in the northern hemisphere won’t occur until April 8, 2024. It will be noticeable on a line from Texas to Maine. A total solar eclipse will occur on August 12, 2045 and will be visible from as close as Salt Lake City, Utah.   After that, the next one to touch the North American continent is March 30, 2052, but you will have to be in the Everglades to experience it fully.

I decided to look into this eclipse business and try to understand it a little better. A solar eclipse is when the moon comes between the sun and the earth. That part is simple enough. Although the moon is smaller than the earth and far smaller than the sun, it is much closer to us. Just as you can actually block out the sun with your extended thumb, the close moon can block the distant sun.

The first thing I found is that this can only occur during a new moon. This is the lunar phase when the moon and the sun are on the same side of the earth (i.e., the moon is between the sun and the earth).  Then the moon is lit only by earthshine. It appears that the moon has disappeared for a time. That happens about every 29 and 1/2 days so I was tempted to conclude that an eclipse should happen almost monthly, making it much less of an intriguing phenomenon. However, the moon’s orbit is tilted a bit from the earth’s orbit around the sun. The shadow of the new moon usually misses above or below the earth making the eclipse only visible from somewhere in space. Only twice a year does the geometry of the three objects align in such a way that even a portion of the moon’s shadow falls on the earth.

This subject just gets more fascinating and I will continue this discussion in a future column.

That is embarrassing but actually a fairly typical response to my nature essays. Since The Best of Nature is created from the very best of 16 years of these nature essays published weekly in the Idaho Falls Post Register (online readership 70,000), The Best of Nature is a fine read. It covers a wide variety of topics including humorous glimpses of nature, philosophy, natural history, and conservation. Readers praise the style, breadth of subject matter and my ability to communicate complex and emotional topics in a relaxed and understandable manner.