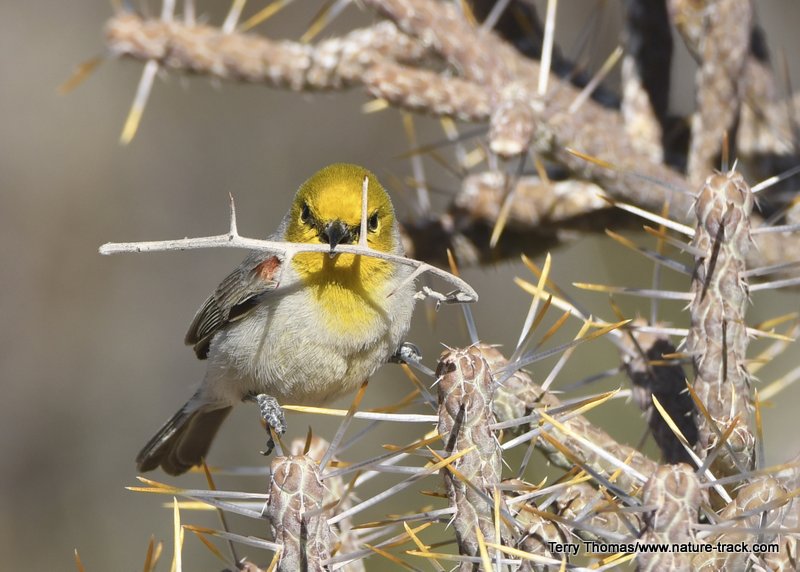 This male Verdin is building a nest. With nothing more than a beak and perseverance, he will build a tight secure shelter for his young to be raised in.

In Bisbee, Arizona, we straddled a small train seat mounted on an open car. With a screech, the small but powerful electric engine pulled our tour group into a mineshaft of the Queen Mine. In its 100-year history which officially ended in 1975, this mine produced eight billion pounds of copper and hollowed out the core of the Mule Mountains, with over 5,000 miles of rail track inside.

The Queen Mine was a reminder that, as humans, we reign supreme as changers of this world. With our tools and technology, we have proven that there is very little that we cannot change should we desire to do so.

A week later, I witnessed a very different engineering story. A petite yellow-headed bird (a Verdin) was industriously constructing a nest in the fork of a cholla cactus. On each of dozens of flights to the nest, this male brought a stick or a piece of fluff. Then he would spend a few minutes arranging this newest addition and rearranging others that already formed a covered chamber with a tiny hole just large enough to admit him.

Once complete, the nest, built by a pair of birds that together would tip the scales at half an ounce, will repel rain and will last for several years.

Bird nests are engineering marvels when you consider that they are built without tools, hands, or even opposing thumbs, or anything more than naturally produced cements. They range from hummingbird nests the size of a quarter glued together with spider webbing, to eagle nests that may weigh up to several tons. They may be made of sticks or mud or grasses and built with a skill that belies the cerebral capacity often assigned to birds.

Other animals also modify their worlds to suit them. Of these, the beaver is perhaps the most famous, building dams so strong it takes a backhoe or dynamite to remove them. One of the largest is twice the length of the Hoover dam and can be seen from space. In the process, they create ponds and lodges in which to live and dramatically influence watersheds.

On another occasion, we watched a pocket gopher, a rarely seen mammal that lives full time underground, as it pushed soil it had dug from its’ tunnel system into a heap on the surface. As a group, fossorial mammals, those that dig holes and dens underground, can also modify this world in a big way. Their systems of tunnels are often extensive and serve to improve water percolation, soil aeration, fertilization and cycling (bringing deep soil up to the surface). Like the Queen Mine, this work is mostly hidden from view.

Even invertebrates get into the building act. There are few things in nature more intricate, delicate and strong than a beautiful wasp nest. Although they are only used one season, this creation of wood and wasp spit can last for several years.

Spider webs come in a dizzying array of patterns and strengths. This silk that spiders manufacture is stronger, pound for pound than steel cable. I once found a large spiderweb in Central America that was anchored with threads as strong as fishing line.

From a 500-square-foot 26-foot deep ant colony in Brazil to termite mound skyscrapers that dwarf a giraffe in Africa, social animals may set the record for complex construction. They solve problems like air flow and temperature to accommodate their large colonies.

The intelligence animals demonstrate when they build, without implements, blueprints or electricity, is astounding. Human engineers are still learning from these “simple” creatures.