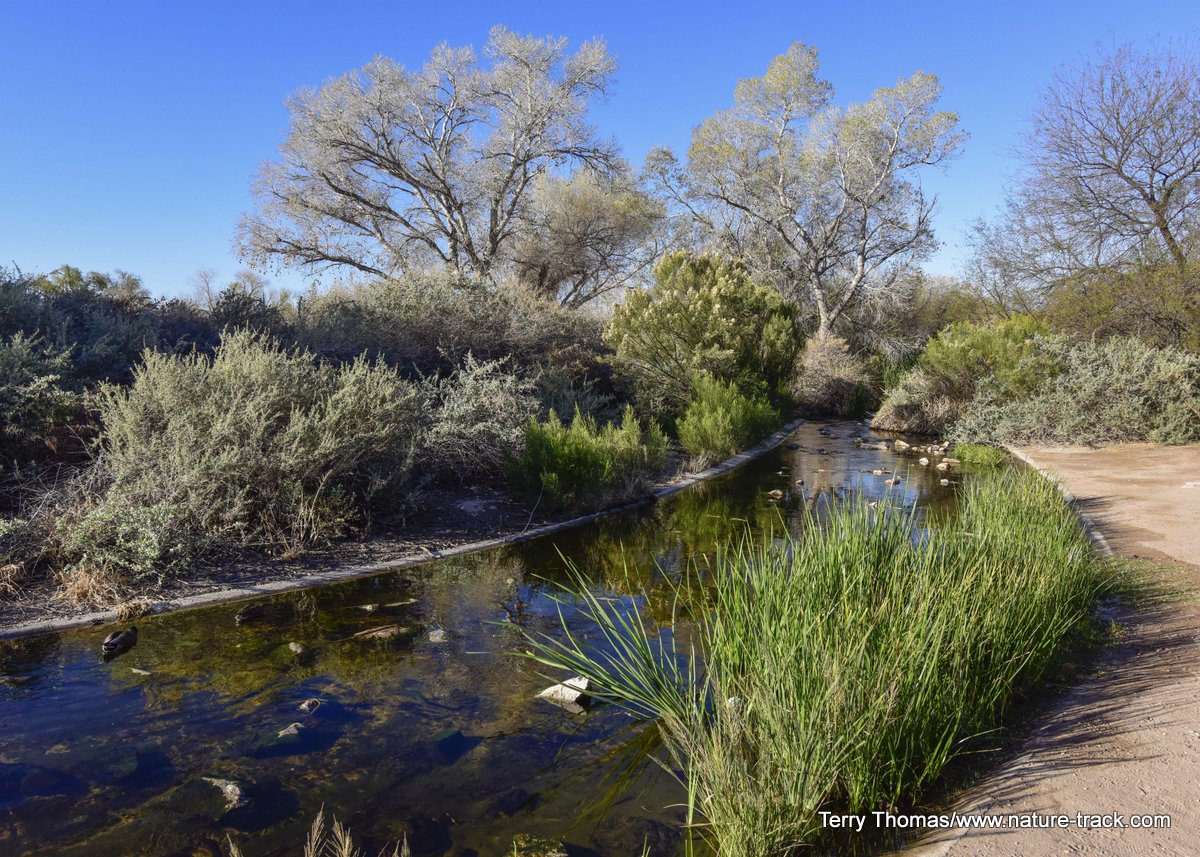 This is one of the drainage streams at Sweetwater Wetlands, a constructed water reclamation wetland in Tucson, Arizona. It looks nothing like a high-tech facility yet performs as well or better.

We were doing a little bird photography in Madera Canyon, east of the city of Green Valley, Arizona. A couple sat down beside me and we began to chat about the places they had been to. They mentioned Sweetwater Wetlands in Tucson. Since Tucson was our base for the week, I was immediately interested, as wetlands almost always provide excellent birding and photography.

We visited the wetlands the very next day, getting there around 11:00 a.m. In two hours, we had logged 30 different species, including two firsts, a black-tailed gnatcatcher and an orange-crowned warbler. Other visitors showed us photos of a resident bobcat capturing a coot. This place attracts not only wildlife, but also thousands of visitors each year.

I was curious about this wetland and read all the educational signs and then read a little more on line. It was constructed in 1997 as a negotiated settlement of a lawsuit filed by Arizona Department of Environmental Quality. They alleged that Tucson was in violation of state drinking water monitoring and reporting requirements. The city committed to design and construct an experimental wetland/recharge facility, with associated wildlife habitat and educational amenities. Yup. This was going to be a sewage treatment plant, but not your average, boring, single purpose plant. And it was going to cost far less than a typical high-tech facility. Half a dozen state and federal agencies and multiple citizen groups banded together to design a project with benefits far beyond water treatment.

This isn’t our first experience with wetlands constructed for water treatment. Two of our favorite places to visit in southern Florida are also wastewater treatment wetlands. Green Cay Wetland covers 100 acres of former farmland that the previous owners sold for one third appraised value with the caveat that the land become a wetland. Wakodahatchee Wetland sits on 50 acres of formerly unused utility land. Both attract tens of thousands of visitors annually and support an incredible amount of wildlife, and not just birds.

A constructed wetland might be called an artificial wetland, but that is only in the sense that it is built by humans and not by nature. Otherwise, they can be identical in form and function. In one aspect, a constructed wetland is even better: it will have a dependable supply of water, improving management and wildlife opportunities. The constructed wetland has one specific purpose though: to clean effluent water before it is returned to the system. Effluent water may be sewage, stormwater, industrial or agricultural runoff, animal wastes and even landfill leachates.

Any treatment system starts with a settling pond where solids are removed. In a constructed wetland, the water then moves through a series of wetlands—marshes full of water-loving plants such as cattails, reeds and sedges. These plants take up some of the available compounds. The plants also provide a home for microbes and bacteria which breakdown the complex waste compounds into simple combinations that can then be used as food by the plants, algae, microbes and plankton, thus removing them from the water. While still not drinkable, the water is then available for many non-consumptive uses such as watering golf courses. It needs one more step of purification to be potable.

Constructed wetlands can be dreary affairs, square or rectangular ponds with monoculture vegetation, accomplishing a single purpose. They can also be, with appropriate planning and design, vibrant wildlife habitats that are attractive to humans.  I have seen plenty of the former, but enjoy the benefits of the latter. To see vibrant wildlife and visitor friendly water-reclamation wetlands in Idaho communities rather than utilitarian ones, only requires that citizens get involved with local communities and introduce and support such projects.

If you are interested in this topic, check out the EPA publication 843-B-00-003, Guiding Principles for Constructed Treatment Wetlands. Also, Constructed Wetlands: Using Human Ingenuity, Natural Processes to Treat Water, Build Habitat. March, 1997, by Joe Gelt is an informative read. Find it on the Web at: https://wrrc.arizona.edu/publications/arroyo-newsletter/constructed-wetlands-using-human-ingenuity-natural-processes-treat-wa