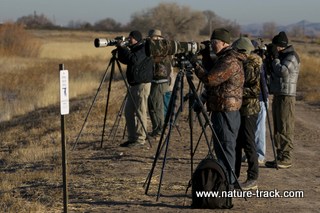 Sometimes our toys and our passions can actually get in the way of our enjoyment of nature. The trick is to never let the toys rule.

The sunrise was still just a promise when I slipped out the door and carefully placed my substantial load of camera gear in the truck. I had a couple of hours before other obligations would draw me home and I hoped to get some video and still photos of wildlife at Market Lake.

When I arrived at my chosen location, all but a sliver of light right at the horizon was suffocated by a lid of clouds. Silhouetting a flock of ducks against this spot of colored horizon, I began to video. After a couple of minutes, I stared in shock at the blinking red light at the bottom of the screen—low battery. I slumped against the fender chagrined, realizing instantly that both spares were at home. A creative string of socially unacceptable words formed on my lips. There wasn’t time to race home and back, the morning was lost.

Then I bit back my curse, shrugged and put the camera away. With nothing more than a pair of binoculars, I walked down the shelterbelt. It was strange at first, not being encumbered by 15 pounds of camera, lens and tripod on my shoulder and a mission to find that killer image, but I warmed to the freedom quickly. I realized I was actually glad to be emancipated from the physical and emotional burden of the camera. I could explore places the cumbersome rigging would not allow and the success of the trip would not be critically judged later on the computer screen. Without an agenda, it was already a triumph.

I returned from the shelterbelt and turned down the dike along the marsh. Incessant and wonderful goose talk emanated from both marsh and sky. Coots and ducks scurried away, a marsh hawk glided overhead. I noticed the broken eggshell, the mouse trails and the ripples in the water when a muskrat broke the surface.

Sunlight lanced through a hole in the clouds and turned a spot of marsh into liquid gold. Camera in hand, I would have been frantic to capture the elusive moment before it was gone. This time, I just watched, and found wonderment once again.

I don’t think I am the only one to suffer from this malady. The previous day, I watched as birders and photographers from as far away as Arco, descended on Market Lake because reports of a long-eared owl had been posted on the web. There was a clamor as they saw me photographing a great-horned owl but it subsided quickly when they realized it was the “wrong” owl. Off they all raced in search of their own trophies, missing the forest for the trees.

I had forgotten how amazing it could all be when I didn’t have a mission to fulfill, when I was able to just be in the moment. I was most pleased to find that even without a camera or a gun or a fishing pole, it all still mattered to me. Sometimes, simple is better.