Living With Elk, Deer and Moose 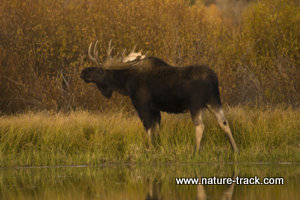 When we think of wildlife in the West, this is usually what we think about: majestic critters in awesome locations. Living in the West can often mean something much different. Having a big game animal in your backyard or tearing up your fence gives you an entirely different perspective! 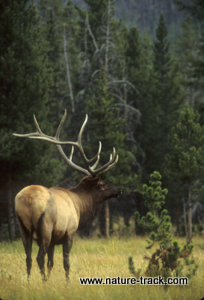 Many people visit the West with the hope of seeing wildlife, especially some of our favorite big game animals; elk, moose and mule deer. For many, the attraction is so strong that they actually move here to be closer to these animals and the wild country they call home. I still have an ad from the Teton valley paper encouraging homeowners to buy and build on “elk, deer, and moose winter range.” Wildlife biologists winced. Building on winter range is a sure way to ensure that it is no longer winter range as big game animals wandering through subdivisions and tromping fences, trashing expensive landscaping and eating hay meant for horses quickly become unwelcome nuisances. Then landowners are left with trying to dissuade big game animals from damaging their property. 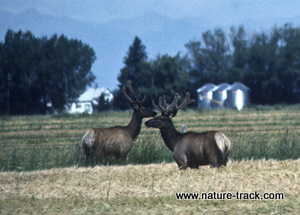 Big game animals in standing crops are seldom a welcome sight. Tolerating them in your backyard often is just as hard.

Damage from big game animals ranges from slight to intense. Sometimes their mere presence makes homeowners feel threatened, especially if the animal is large. At the other extreme, a herd of elk can do considerable damage to property particularly when spooked or harassed. However, there are things homeowners can do to reduce damage and encourage wildlife to remain wild. 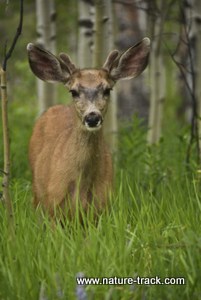 There is no doubt that big game animals are awesome to watch and to enjoy. However, they are still wild animals and learning to live with them takes some work and preparation on our part.

FEEDING: The first rule is to not feed wild ungulates. This encourages them to stay around, concentrates them and thus promotes disease transmission, reduces their respect for humans and in some places in Idaho is illegal. 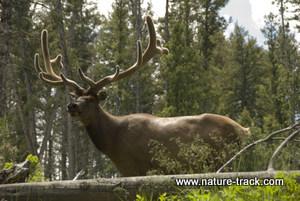 At some point in August, deer, elk and moose begin to rub off the velvet from their antlers in preparation for the mating season.

DAMAGE FROM RUBBING: Damage from antler rubbing is one of the most common complaints. A buck deer can really wreck the look of an expensive ornamental tree. A moose or elk can completely devastate that same tree, often killing it. Aside from keeping the animals completely out of the yard (discussed in a few minutes), the only way to prevent rubbing damage is to build a sturdy fence around each tree. This is easily accomplished with three six foot metal T posts installed in a triangle around the tree, about four to five feet out. Then net wire or barbed wire can be stretched around the posts. The idea here is to get the fence far enough from the tree that the animal can’t reach it but not be so far out that it can jump over the fence. If you want the fence closer or further from the tree, you may need to use taller posts. 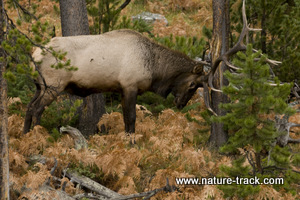 The damage a bull elk can do to a tree is pretty amazing. It is particularly distressing if that tree is your prized landscape tree.

Providing an alternate post may also alleviate some rubbing on trees. An alternate post can be the bole of a dead tree you leave standing or can be a six inch diameter ten foot post that you install in an appropriate location. Remember that these animals are strong and full of testosterone though so if you put up a pole, make it sturdy.

DAMAGE FROM BROWSING:  Damage to ornamentals and garden plants through browsing is a big complaint. There are many trees, shrubs and flowers that wildlife find irresistible and they can undo careful landscaping in just one visit. This is even the case with native plants. Some, such as dogwoods, are highly preferred, so even landscaping with natives isn’t necessarily the answer. However, there are a number of plants that are less palatable to wildlife. In plant catalogs these are often called, “deer resistant”. Filling your yard with these plants will save you a lot of trouble.

On the other hand, vegetable gardens, almost by definition, are chock full of plants that big game animals (as well as rabbits and raccoons) dearly love. Without a fence, it is often nearly impossible to keep them out. Several products may help to some degree: a hot sauce spray that can be applied to shrubs and flowers, small cloth bags full of human hair dangling from branches and the generous application of predator urine around the plants you want to protect. You can see that even if these techniques work, they take a lot of time and must be re-applied routinely.

FENCING: By far the best way to reduce or even eliminate damage from big game animals is to fence them out. This does not necessarily require a fence strong enough to repel the French Foreign Legion. In fact, much of a fence is illusion. I once trapped a large number of elk using an old rotting elk trap that hadn’t been used in 20 years. If the elk were to challenge this wooden trap (about eight feet tall) I was confident that they would break through. So, we purchased several hundred feet of a black garden “mulch” cloth and using screws, attached it to the inside of the trap. It gave the trap the appearance of being very solid and in the course of two winters of trapping, we only had one cow challenge the wall. Incidentally, the wall did not hold up to her attack just as I predicted.

There are several types of fences that are effective in excluding big game animals. The most commonly referred to is a fence that is eight feet tall and made from anything from wood rails to metal spikes to ten foot T posts and barbed wire (certainly not the most attractive option).

However, it is my assertion that an eight foot fence is not necessary in most situations even though I have seen elk struggle over an eight foot solid wood wall. As an example, for many years I managed a winter game range east of Idaho Falls. As part of our preparations for emergency feeding during a nasty winter, we routinely stored several hundred tons of hay right in the heart of the winter range. Most of the hay was protected under a hayshed but it was always an attraction for the several thousand elk that wintered there. We enclosed several acres with an eight foot fence to keep the animals well away from the hayshed.  However, there was a weakness in our system, one I thought the elk would surely exploit. While our fence was eight feet high, our gates, two 12 footers each on each of two opposite corners, were set with a top height of about five feet. Any higher would allow calves to crawl under. At first I thought we needed to weld extra framing on top of the gates or the elk would certainly jump the gates and have their way with the haystack. But to my surprise, that was never the case. Even though thousands of elk walk past that hayshed every year, we have never had even one jump the gate. I had that same experience when I built stackyard protection fences for ranchers: if the gate was about five feet high, it was high enough to discourage jumping.

Those experiences have led me to the conclusion that it is the solidity of the top rail coupled with a reasonable height that makes the elk (and deer and possibly moose) too jittery to jump it. The upshot of all this is that I believe you can get away with a five foot high fence if you put a top solid rail on it.

I believe the same would be true for a welded metal fence as well. My brother has a beautiful six foot tall fence made from metal tubing. The uprights look like spears to me and I think the elk have the same reaction. A fence like that, while insanely expensive, would likely work at the five foot level as well as elk can readily recognize the risks involved in trying to cross it.

This same logic can apply to solid five to six foot vinyl or cedar fences as well. The animals are not likely to challenge it.

Another short fence that works well is the cross-buck fence. A cross-buck fence has two legs that form an upside down V with rails between the “cross-bucks”. These have been shown to be almost completely impenetrable for elk. The base of the fence is four to six feet wide and the top is only about four feet high, but the combination makes it very difficult for the animals to comfortably jump. Deer can negotiate the fence very quickly by just ducking under and climbing over the rails so if you want to exclude deer as well you will likely need three rails per side.

A final permanent fence style that has worked well is actually two fences about four feet apart. The theory here is that the four feet is too far to jump yet it is too short a distance to land inside to prepare to jump the second fence. This has been very effective with deer and I suspect it would work well with elk and moose as well.

Electric fence can also be used effectively. It has the advantage of being portable and adapts to almost any situation. Part of the effectiveness of an electric fence is to train the animals that it hurts to touch it. This can be done by winding strips of aluminum foil onto the hotwire every so often. Add an attractant such as peanut butter and when the animal gets too close with its nose or tries to lick the attractant, it gets a nasty shock.

I might as well say it here, moose are often an exception to any rule. If a moose wants to go somewhere bad enough, or is motivated by fear, it can snap a barbed wire fence like kite string. Needless to say, beautiful vinyl fencing or even cedar fencing doesn’t stand a chance against a motivated moose.

One final thing regarding fences: if you are building your fence on a hill, the slope of the hill will make it easier for the animal to jump the fence going downhill (the slope effectively makes the fence shorter) and will accentuate the height of the fence going uphill. So, an animal might be able to get across a fence and not be able to leave the same way. That is something to keep in mind when building your fence.

Living with elk, moose and deer can be fascinating. If you are lucky enough to have them on your property and are tolerant of them, you will enjoy many wonderful experiences. If the experience gets to be a little much, try some of the strategies here. They may help to make co-existence possible.

Check out this short video for some other creative ideas for living with wildlife.