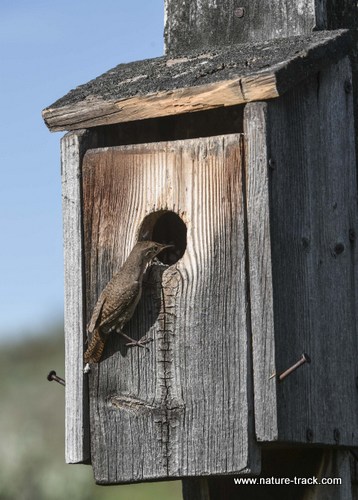 The house wren takes a quick peek inside the nest box seconds before the bluebird pair drove him off again.


The mountain bluebird pair was completely oblivious to me and the camera lens jutting from the truck window, and was putting on quite a show. Every few minutes, one or both parents would arrive at the nest box with an offering for the youngsters inside. The parent would feed a chick and then dive into the box to retrieve a white waste sack produced.

The show went on for about half an hour. During that time, I was increasingly aware of the almost constant chatter of a house wren, a tiny bird larger than a hummingbird but smaller than a chickadee. I could see it down the fence line, its’ energetic movements taking it first to a sagebrush limb, then to a fence wire, then to a fence post and back to the sagebrush. It seemed to be constantly in motion and drawing ever closer.

I hoped for two shows now, the bluebirds and the wren, and wondered how to capture both. Little did I know that the two performances were about to merge in a most dramatic way and leave me wondering if I had met the devil himself.

Shortly, the wren was singing and chattering right beneath the nest box with the chicks in it. Wrens, like bluebirds, nest in cavities and nest boxes are great surrogates for holes in aspen trees. This wren was clearly eyeing this nest box as something desirable.

House wrens have no etiquette when it comes to house hunting and neighbors. They are intolerant of neighbors and If they can evict one, they will do just that, even if it means destroying the nest hole by filling it with sticks, tossing their eggs from the nest or even killing the chicks.

It didn’t take long for the battle to begin. The wren started by jumping onto the nest box. Like a blue rocket, the male bluebird dove in from a nearby fencepost perch, striking at the wren in a blue of blue feathers and amid loud squawks from both birds. At least four times larger than the wren, it should have been no contest. But for the wren, that was just the opening salvo in a harassment that would last for several hours.

The wren sped for cover but never went more than about 20 feet away. Then he would build up his nerve again, begin chattering and work his way down the fence. Then like an acrobat, he would jump—wire to post to box, sometimes to just retreat, other times making it to the nest hole for a peak before a bluebird rushed in. There was murder in his eyes and he was not backing off.

The bluebird parents continued their duties, but now they were careful never to leave the nest box unguarded. Eternal vigilance was their watchword. One was always nearby, often perching on the box itself when the wren was near. This was the only way to protect their babies but it effectively cut the amount of food getting the five hungry chicks by half or more.

I wondered how this battle would end. The chicks were large, perhaps close to fledging but this wren was persistence personified. I returned two days later to find that the battle still raged. This time however, the chicks, one by one, emerged from the hole and took their first flight. The bluebirds had won but so had the devil. The neighbors were gone and that is what he wanted in the first place.