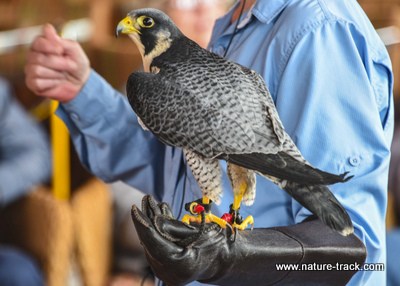 Captive peregrine falcons, like this injured male, were the salvation of the species when DDT poisoning stopped reproduction for years.

With just a few computer mouse clicks, I was looking into a nesting box on Camas National Wildlife Refuge and observing an expectant peregrine falcon mother. Any day now, her eggs will hatch, adding several more peregrine falcons to the world population.

This is a unique way to observe the intimate behavior of wildlife without disturbance and I enjoyed watching while the birds went about their business. The webcam was the brainchild of the Friends of Camas group and has been up and running, albeit sometimes sporadically, since late April. The nest box, sitting on what is called a hack tower, has been in place for over 30 years.

The peregrine is a bird with worldwide distribution, living on every continent except Antarctica. For over a thousand years, it has been preferred by falconers (those who train falcons, hawks and eagles to hunt for them) for its speed, grace and beauty.

Webcams are pretty commonplace these days and for wildlife viewing, they are great. The charismatic and handsome peregrine falcon seems to be a favorite webcam subject as well, in part because we came close to losing the species to the pesticide DDT.

Never abundant, it was estimated that there were 3,875 nesting pairs of peregrine falcons in North America in the 1940’s. By the mid-sixties, this number had dropped 90 percent, to 324 breeding pairs in all of North America. The eastern population was completely extirpated.

While shooting, egg collecting and loss of habitat contributed to weakened populations, it was discovered that the use of dichlorodiphenyltrichloroethane, or DDT, was really the culprit. This popular and effective pesticide was leaking into the food chain with devastating results for peregrines. As apex predators (predators at the top of the food chain) they consumed birds that fed on seeds, plants, fish and insects that had been contaminated with DDT. The chemical accumulated in the falcons where it interfered with calcium production, causing weak egg shells that broke under the weight of the brooding adult. For years, peregrine falcon chicks were almost non-existent.

DDT was banned in 1972 and although it would take 15 years to break down in the environment, it was a start. At Cornell University, adult peregrines were successfully bred in captivity and this was the start of a wildly successful restoration project. After the eggs hatched they were raised for about three weeks in the lab. Then they were transferred to hack sites (artificial nesting sites) like the one at Camas NWR. Many of these sites were in cityscapes where tall buildings formed surrogate cliffs and pigeon populations provided an abundant prey base. According to the Midwest Peregrine Society, 48% of current peregrine nesting sites are located on high-rise buildings and other tall structures in the Midwestern states.

These released birds, over 6,000 since 1974, were cared for until they could fly and hunt on their own. Many of these birds returned to their hack towers and established them as their permanent nest sites, as happened at Camas NWR.

In 1999, the peregrine falcon was removed from the endangered species list. In this era where conservation legislation is going to face direct challenges, it is good to remember that regulations that protect animals from extinction can and do work if we have the will allow them to.