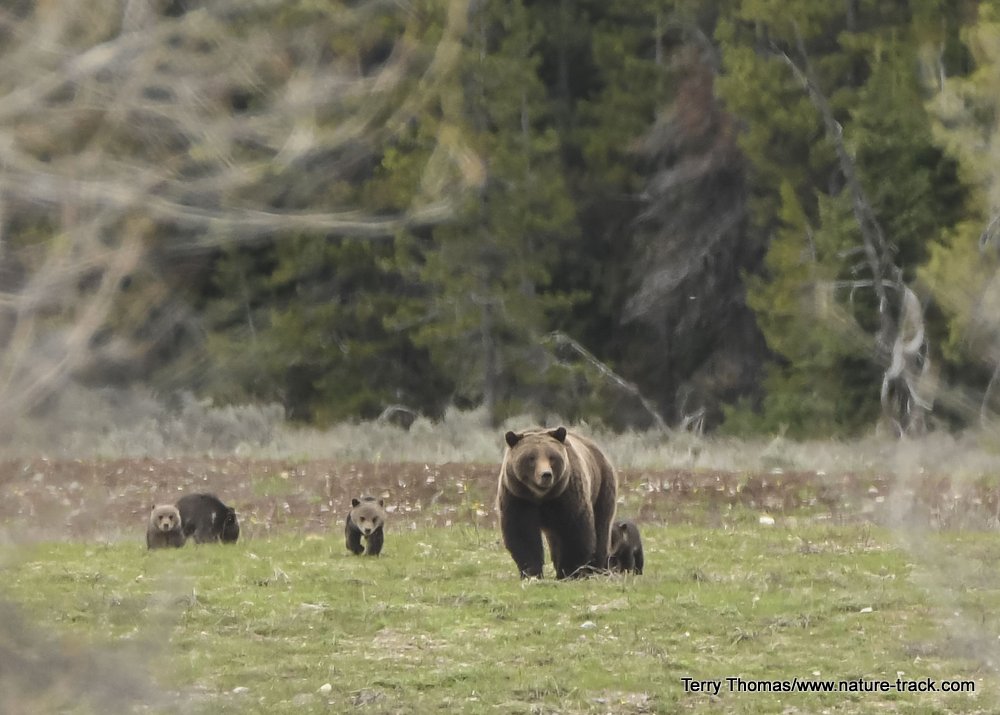 Grizzly 399 has defied the odds in every way, surviving and producing a litter of four cubs when she should be enjoying old age.

It isn’t everyday that you get to see a living icon. But that is what we were headed for, although we didn’t know it. On Monday, May 18, we were first in line at the Wilson entrance to Grand Teton National Park for the limited opening of the Park. At just a little before noon, a ranger waved us in and we were off. As we traveled north through the park, we were a little surprised and disappointed that wildlife in abundance wasn’t lining the roads that have been off limits to visitors for the last two months due to Covid-19 restrictions. That was about to change.

After finding that most of our favorite haunts—Signal Mountain, Cattleman’s Crossing and Two Ocean Lake—were all still closed, we headed toward Yellowstone National Park. We have driven from Moran to Flagg Ranch dozens of times and rarely see wildlife so my expectations weren’t high. Things were different though when the Pilgrim Creek bridge came into view. Dozens of cars lined the road and visitors armed with cameras, spotting scopes and binoculars were being herded by half dozen rangers.

I asked a photographer what was going on. “You just missed her”, he said. “Who?” I replied. He looked at me like I was an idiot and said simply, “399”. Crazy, but I knew exactly what and who he was talking about. Grizzly Bear 399, so dubbed by researchers long before she was famous, is possibly the best-known grizzly in the world, and a highly successful mother. She is likely the only bear in the world with Facebook, Twitter and Instagram accounts. She was late leaving her den this year though and there was concern that this matriarch of grizzlies had, at 24, surrendered to old age.

Instead of succumbing, this old gal surprised everyone by emerging from her den on the first day the park was open to take her four, yes, four new cubs down to her familiar haunt near the highway at Pilgrim Creek. Grizzly 399 has reared several sets of triplets and has produced at least 20 children and grandchildren including this year’s quartet. However, her reproductive capacity should have peaked years ago, yet there she was with a rarity, and for her, a personal best.

Much of 399’s fame comes from being highly visible to tourists and photographers. Researchers have determined that this is not an accident. The greatest threat a grizzly bear cub faces is from boar grizzlies that attempt to kill the cubs and thus bring the female back into estrus for breeding. Grizzly 399 and her nearly equally famous offspring, another female dubbed 610, have taken to living near roads and people as a way of discouraging boars, which tend to shy away from the more populated areas. It is always a somewhat tenuous grizzly-human truce, but for most of 399’s life it has worked, and she can raise her cubs in peace.

We decided to hang out for a while, not overly hopeful that we would catch a glimpse of the famous bear. But soon, a lady next to me with a spotting scope whispered to herself, “There they are!” She graciously pointed them out to me and I was able to get a photograph of a mama bear who should be past her prime and her greatest achievement yet—four cubs.

Grizzly 399’s amazing story should give hope to all of us seniors that life is far from over. We can still defy the odds and choose the life we live.