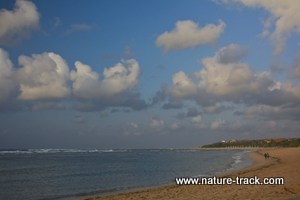 When El Niño and La Niña come to play, weather can change dramatically and influence the lives of many of the people on the planet.

An El Niño may originate far away in the eastern South Pacific, but the impacts are truly global. During an El Niño, the Pacific Northwest is warmer and drier than usual while California and northern Mexico get deluged. A warm mild winter may be in store for the Midwest and northeastern U.S. and Canada, while winter in northern Europe may be colder and drier and southern Europe’s winter may be wetter and warmer. Australia, Indonesia and southern and western Africa may dry up and blow away, while torrential rains drench the east coast of Africa and the west coast of South America while at the same time drying out the Amazon basin. All that craziness happens around the globe because part of one ocean changes temperature by a few degrees.

Drought and deluge are just part of the wild ride an El Niño can bring. The name, El Niño, comes from South American fishermen who noted that the warming waters seemed to arrive around Christmas time. For them, an El Niño means for a season or more, the fisheries that sustain them collapse as the nutrient rich cold water is replaced by the warm nutrient poor water.

That effect reverberates through the system. Species like scallops will thrive in the warm water and some smaller fish may increase as their predators move to cooler water. But like the fishermen, seabirds that depend upon the fishery also suffer, starving by the thousands as the fish they depend upon either die or move to cooler waters. This takes another bite out of the local industry built around the birds and their valuable guano.

Although the effects of an El Niño can be devastating, they are temporary, usually lasting only a season or two. Then ocean temperatures return to normal. The fish and wildlife recover and good times return to the shores.

The flip side to the warming ocean of El Niño is La Niña, or little girl, which sometimes follows an El Niño. It is a cooling trend when an excess of cold water rises up in the tropical Pacific. The ocean temperature may drop by as much as 7°C below normal.

La Niña has essentially the opposite effect on weather of an El Niño, drying where the little boy wets, heating where he chills. Of course, it isn’t as simple as that, but in general, the effects are opposite.

La Niña has a sucker punch as well. Where the hurricane season during an El Niño is modest, during a La Niña, it can be extreme. The strong La Niña event in 2007-2008 is blamed for making the 2008 hurricane season a wild one.

Scientists still try to understand all the complex interactions that cause and influence an El Niño/ La Niña event. However, predicting an event is becoming easier. We’ll know by June if El Niño is going to romp through our lives once again.

An El Niño/ La Niña event and the global impacts one brings is a less than gentle reminder that even though this world is a big place, it is a lot more interconnected than we may want to admit.