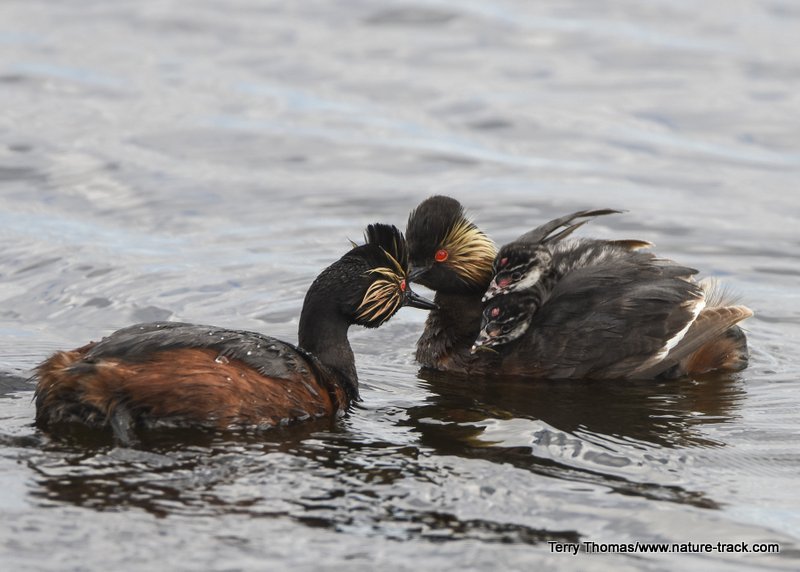 Eared grebe pairs make good parents. Mom gives the kids a ride that keeps them warm, dry and away from predators while dad keeps up a steady flow of food for the ravenous youngsters.

Driving down the wildlife loop at Camas National Wildlife Refuge last week was frustrating. No matter how slow we drove, the crunch of the tires and the engine cooling fan always seemed to push wildlife away. I particularly wanted a nice portrait of an eared grebe, a handsome waterbird, but they would see or hear us coming and with a plop would dive under the water only to resurface behind us or too far out for the lenses.

Then my friend, Gary, spotted an eared grebe chick near shore. This had some potential. We crept up, sure the parents would dive, but they seemed to pay no attention to us. Soon we saw another chick floating nearby and I realized why the mom wasn’t diving. Like loons and mergansers, grebes often carry their chicks on their back. Mom’s posture was a little off and I wondered if she might have a chick hitching a ride.

As we watched, the two swimming chicks came over to mom and tried to scramble up onto her back. One made it but the other didn’t and it began paddling around again. As the successful chick scrambled under mom’s wing, we saw a sibling already there.

In the meantime, dad was diving and coming back with morsels to feed the chicks. Both mom and dad were so busy they scarcely seemed to notice us so long as we stayed in the truck.

I shot a few images but there always seemed to be a reed or two right in front of the birds. I would edge forward or backward just a bit for a clear shooting line only to have them drift behind a cattail.

While we played this game, we kept an eye on the youngster that had not gained a free ride from mom. Neither parent made any attempt to corral in or feed the errant offspring and the separation grew wider. We wondered what would happen, sure that if the parents didn’t collect the little one soon, its fate would be sealed.

As a hardened biologist used to managing the population and not the individual, I feigned indifference but inside I worried for the little guy. I realized that on a population level, whether or not this particular chick survived meant nothing. Yet, I couldn’t help but think of the story of the boy throwing stranded starfish back into the sea. A man came along and chastised the boy, telling him that his efforts meant nothing to the starfish population. The boy reached down and picked up another starfish, examined it, and tossed it back into the ocean. “It means something to that one,” he countered.

I continued to photograph, all the while keeping an eye on the errant one. The parents finally drifted into an area without reeds or cattails and I had my shot, but the little chick seemed abandoned to its fate.

To be honest, though I was equipped for it, rescue never entered my mind. Nature would take its course, whatever that would be. As it turned out, I am glad I didn’t interfere, for when mom drifted close again, baby practically ran on water to her and with a little boost, scrambled up to join its siblings.

Once she had her full brood, mom headed away from us, clearly a sign that she had not forgotten her little one and proof positive that nature, given a chance, isn’t always cruel.