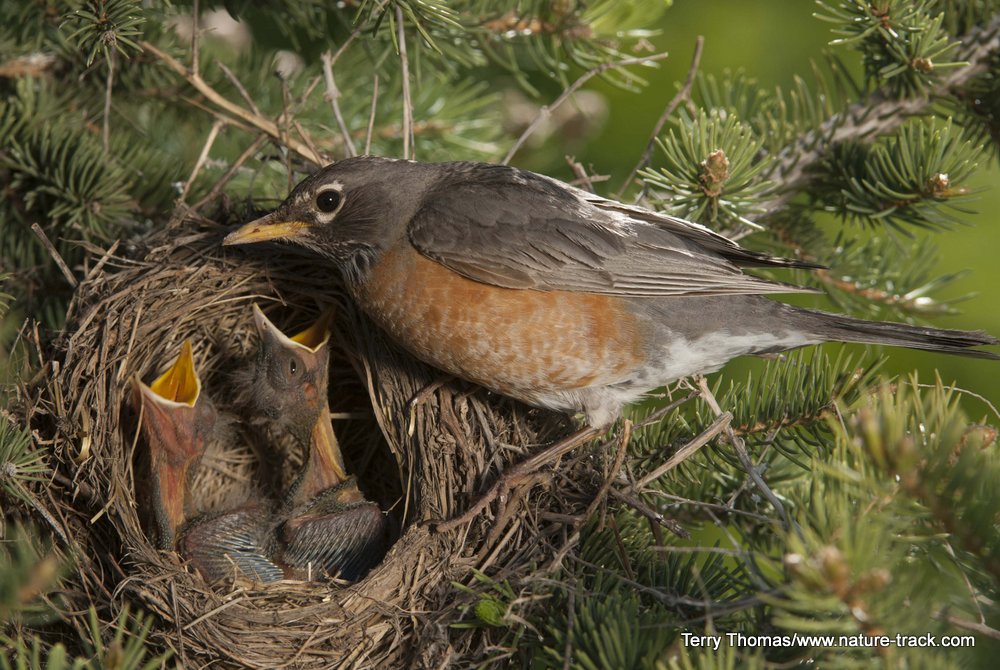 Like most songbirds, robins start out life naked and helpless, totally dependent on their parents for survival.

My son sent me a photo of a baby robin, difficult to recognize because it was still about half naked, with feathers just beginning to grow. It had fallen from a nest and was, to my granddaughter’s dismay, quite dead. This baby was completely helpless, dependent on its parents for growth and survival, and they, in turn, were helpless when it came to getting it back in the nest.

Yet, other bird chicks are quite adept at getting around shortly after hatching. I think of killdeer, grouse, quail, ducks and geese when I consider young birds that can follow parents within hours of hatching. These young birds look different too, all covered in downy feathers with eyes wide open.

These birds represent the difference between precocial and altricial births (hatchings). Precocial birds hatch ready to go. They have already formed all the necessary equipment needed for them to forage and survive. Parents are there mainly as guardians and teachers.

Altricial chicks hatch completely helpless. They are usually naked and their eyes are not open. Considerable development must occur before they can leave the nest. They are dependent upon their parents for feeding, nest hygiene and protection. Examples of birds with altricial young include most songbirds, raptors and many waterbirds such as gulls, ibis and herons.

Elaborate nests usually mark species with altricial young. They need a substantial home in which to raise their brood. These nests must house their kids for several weeks and need to be sturdy and safe. It is common to find them in trees, on ledges or in tree cavities.

The parents of precocial chicks don’t need their nests once their offspring hatch. These nests tend to be more basic and are commonly located on the ground.

Mammals follow a similar pattern. The young of all ungulates—bison, deer, caribou, wildebeest, moose and more, are precocial, able to follow mama shortly after birth and are soon sampling the vegetation along with mother’s milk. However, some, such as deer and pronghorn fawns, are not able to outrun predators at an early age so their mothers hide them and move away to feed so as to not draw attention to them. These are usually the babies that humans perceive as “abandoned” and which end up being kidnapped when the bumbling human tries to “rescue” them.

On the other hand, rodents, bears, wolves, lions, weasels, rabbits and many more species (hares are precocial) all give birth to dependent, or altricial, young. They are totally helpless, impossibly cute and can do nothing but suckle for their sustenance for the first week or more of life. In the case of some rodents, it may take only a couple of weeks to reach maturity. For many mammals though, maturity isn’t achieved for several years as there is much to learn before the youngsters are ready to strike out on their own.

Humans are the clear winners when it comes to the need for parental care. Like altricial birds and mammals, no human would survive long without significant parenting, something that must continue for 18-20 years.

I find it fascinating that Nature takes so many different ways to reach the same end. Whether it starts life as a helpless naked lump or fully furred or feathered and ready to go, each animal eventually strives to mature and reproduce, for that is its biological destiny.