Plants at Craters of the Moon 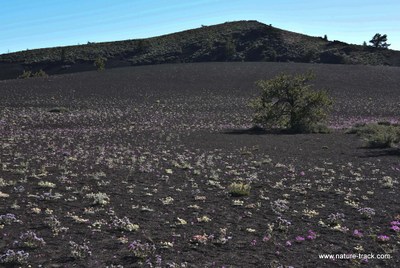 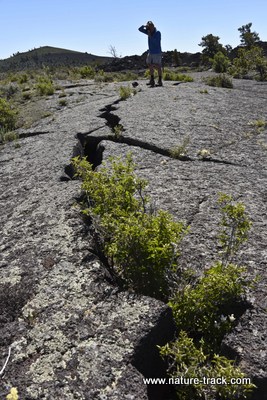 Syringa, Idaho’s state flower and a shrub one would normally associate with cool forests, can thrive in the unique habitat found deep within lava cracks.

In some places, lava cinders crunch underfoot. In others, jagged aa lava or the ropy, pahoehoe lava cover the land like a blanket and shred boot soles. The brilliant white sun overhead floods the ground with scorching rays which the black lava absorbs and radiates back, cranking the surface temperature up as high as 150 degrees Fahrenheit.

There are places in this harsh landscape where, if it weren’t for the searing air entering my lungs, I could believe myself on the real surface of the moon. Yet, unlike the moon, plant life thrives here.

Craters of the Moon National Monument boasts over 750 plant species and as many as 35 distinct plant communities. Part of that owes to the fact that not all of Craters of the Moon is lava. Especially on the north end, there are stream communities, aspen groves and Douglas fir stands. Yet even the most treacherous of lava flows can support an amazing array of plant life adapted to living under exceptionally tough conditions.

Plants that thrive in the lavas and cinders must overcome a triple whammy of low moisture, poor soils and high heat. Many of the plants have developed simple strategies to combat these obstacles. For instance, many plants have silvery leaves that reflect sunlight. Some also are covered in tiny hairs  that helps to reflect sunlight and retain water.

But there are other strategies as well. Looking across a field of gravel-sized cinders, it looks like the flowering plants have been spaced by a meticulous gardener. However, the tiny plants have an broad root system that can soak up the rare summer shower. They space themselves naturally to match the limited resource of water and to avoid competition from the neighbors.

Many of the plants at Craters are also short-statured. While this keeps them down in that 150 degree Fahrenheit zone, it also minimizes the impact of the almost ever present wind that can suck moisture from a plant like soda through a straw.

Other plants live in crevices, cracks in the lava that may be six inches to several feet across and from several inches to many feet deep. The bottoms of these crevices are often cool and moist and protected from the wind. The habitat is so different from the surface that moisture and shade loving plants such as ferns, thrive there. Craters of the Moon boasts at least three different species of ferns.

While lava does eventually breakdown into a coarse soil, most of the soil provided to the plants comes on the breeze. Wind deposited soil, called loess, settles in cracks and piles up in deposition areas. As plants establish in the soil, they capture more soil and pave the way for a later successional stage to follow.

The plants at Craters of the Moon are evidence of that famous line from the movie, Jurassic Park--“Life will find a way”. All we have to do is give nature a little room and a chance and it can do the rest.