Discovering the Rest of Idaho 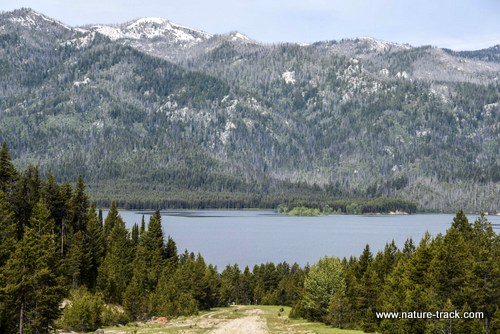 Deadwood Reservoir is just one of thousands of Idaho gems and is far more attractive than its name might imply. It is worth the five-hour drive.


Most of Owyhee County, Idaho, is a black hole for me. Otherwise, I used to feel that I have done a reasonably admirable job of at least touching base with most of Idaho.

Then my son invited us to go camping at Deadwood Reservoir. My ignorance became obvious when I told him that Cascade was too far to drive for a three-day trip. “You don’t go to Cascade,” he intoned. “You will go through Stanley.” In my defense, you CAN get to Deadwood Reservoir from Cascade once the road opens later this month. But I really didn’t know any more about Deadwood Reservoir than the name and I wasn’t expecting much. Jake assured me that the fishing was hot and convinced me it was worth a visit.

Deadwood Reservoir turned out to be a great place for a spring campout. We passed through Bear Valley, a beautiful wide basin full of elk, deer and even pronghorn. We were nearly 40 miles from pavement and Forest Service campgrounds had yet to open for the season. Consequently, we shared the reservoir with only a handful of other people in the time we were there.

This big, pretty, tree-lined reservoir was indeed full of hungry kokanee salmon, rainbow and cutthroat trout and the water was already warm enough for the kids to play on the sandy beaches. Deer and even elk wandered through camp. Its only drawback was being a five-hour drive from Idaho Falls. We were glad to get to know yet another Idaho gem and we hope to return next spring.

I guess I had judged my travel expertise by those placemats sometimes found in local diners throughout the state. You know the ones: They have the state of Idaho with some of the more prominent cities listed. On that “map”, I have been to every single place except for Silver City in, you guessed it, Owyhee County. I suppose that really doesn’t make me all that well traveled as a closer look at a more detailed map reveals a lot of country between those towns.

Over the past five or so years, we have made a lot of headway in a quest to more deeply explore this state. We discovered the beautiful St. Joe River, explored Hagerman Valley and City of Rocks National Reserve. We have spent time at Craters of the Moon National Monument and walked new trails in the White Cloud Mountains. I’ve hiked a section of the Middle Fork of the Salmon River and visited Chamberlain Basin. Each one has become a new favorite place and has pointed us to additional places and activities to try such as the Hiawatha bicycling trail in North Idaho, rafting the Middle Fork and Little City of Rocks north of Gooding.

I’ve also been to only 14 of Idaho’s 30 state parks and some of those visits were 30 years ago. Clearly I can improve on this, especially if I tire of the centennial crowds in our nearby national parks.

No, I am not an expert on where-to-go in Idaho, but I am working on it. If I get around to enough places, maybe I can print up my own placemats for the diners.