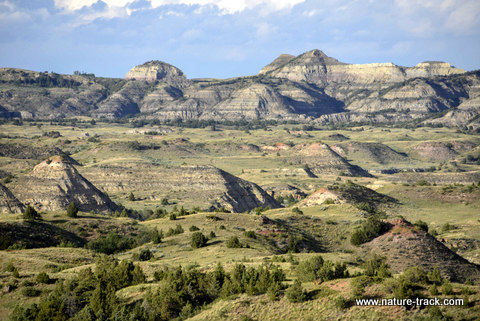 Theodore Roosevelt National Park is subtly beautiful with colored rock, rolling hills, rivers and cottonwood filled ravines. It is the peacefulness though, the same quality that Roosevelt sought out when he came here in 1884, that makes this lightly visited park unique.

A young Theodore Roosevelt stepped off the train, ready to head up management of his new Maltese Cross Ranch.

Roosevelt, 24, was there for one reason: to find himself again and to recover from the anguish of losing his mother to typhoid fever and wife to kidney failure within hours of each other on February 14, 1884. His diary entry for that day is simply a large X and the poignant words, “The light has gone out of my life.”

His ranching life expanded quickly and he purchased a second ranch, 40 miles north of Maltese Cross, christened Elkhorn for the set of bull elk skulls, antlers still locked from combat, found where he built his ranch house.

Roosevelt loved the ranching life, taking solace in the muted beauty of the landscape, the stillness and the hardy life of a rancher in the 1880’s. Fate dealt his business a fatal blow during the infamous winter of 1886-87 when most of the cattle in the Dakotas and eastern Montana were killed by severe weather. He sold out and moved back to New York to resume a promising political career.

The badlands of North Dakota had left its mark though, and he would later remark, “I have always said that I never would have been President if not for my experiences in North Dakota.”

You don’t incidentally or accidentally go to Theodore Roosevelt National Park. You have to want to go there as it really isn’t on the way to much of anything in particular other than the Bakken oil fields. So, we intentionally wound through Wyoming, battled the winds across Montana and found ourselves in Medora, South Dakota, to see why this land held such a spell over our 26th president, a man to whom anyone who loves the outdoors owes a debt of gratitude.

What became clear immediately was TR’s description of the country as one of, “a land of vast silent spaces...a place of grim beauty,” was accurate. The grandeur of the western parks is absent here but so is the busyness. As I write this in a campground of 60 units, it is almost completely quiet and still. No voices, no generators, no traffic. Bird song is easily heard though.

The grim beauty of the North Dakota Badlands country is not nearly the acerbic emptiness of Badlands National Park in South Dakota. Here the draws are full of cottonwoods, the Little Missouri River bisects the north and south units and the dissected rolling hills, looking like crumpled paper, are green with vegetation. The views extend forever though. The descriptor isn’t grand, it is peaceful, exactly what Roosevelt sought.

We are the future generations that he was talking about when he said: “The nation behaves well if it treats the natural resources as assets which it must turn over to the next generation increased, and not impaired, in value.” Roosevelt did his part and then some.  I hope we will be able to do the same.