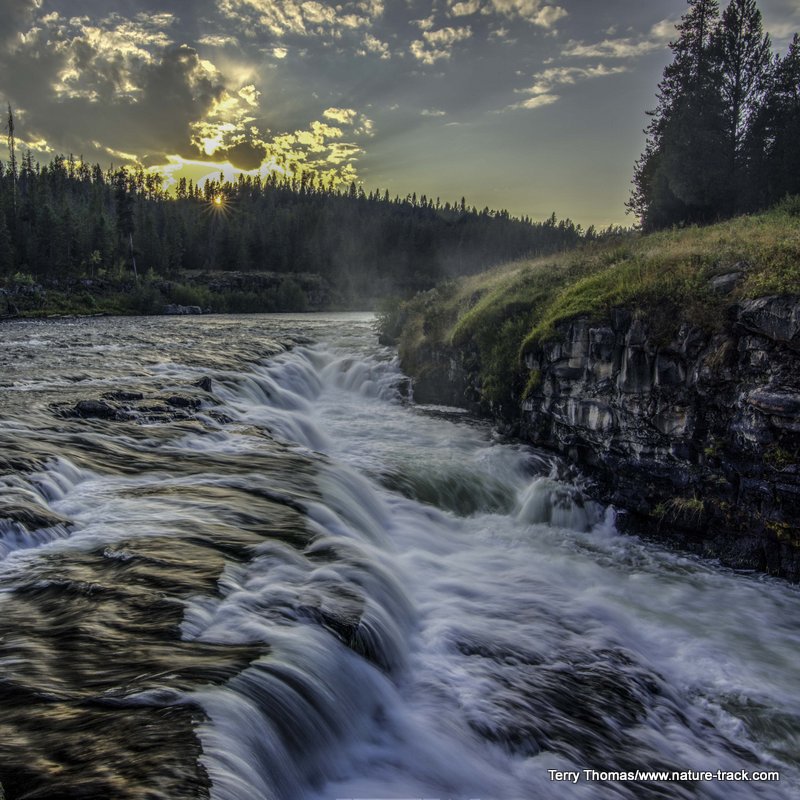 Sheep Falls on the Henry’s Fork is the beginning of a series of falls where the river takes dramatic steps off the rim of the Island Park Caldera.

Just five miles from the watershed of the Missouri River, Eastern Idaho’s Henry’s Fork of the Snake River (a.k.a. The North Fork) begins when the daily influx of 500,000 gallons of 54-degree water from Big Springs unite with those from Henrys Lake Outlet near Mack’s Inn in Island Park.

Those five miles make all the difference though and this river races, meanders and falls toward the Pacific Ocean, so ten miles might as well be 500. It’s journey of only 127 miles (about 70 crow-fly miles) before co-mingling with the other famous Eastern Idaho River, the South Fork, are miles full of wonder.

The very character of the lovely place we call Island Park is defined by this river. Whether it is running over Coffee Pot Rapids or winding silkily through a flower-packed meadow, life blossoms along its banks and flourishes because it is there.

Hardly before it even begins, the Henry’s Fork must work its way through Island Park Reservoir where the water is stored for later diversion to water crops in the valley below. During the lull, thousands of boaters, swimmers and fishermen enjoy the stilled water. The most expensive real estate outside of Sun Valley surrounds this reservoir.

The Henry’s Fork sheds its shackles when it plunges through Island Park Dam and almost immediately gets an infusion from its first major tributary, Buffalo River. A shallow but steep-sided groove named Box Canyon confines the river like a pipe for the next three miles providing floating and fishing waters in a pristine setting. At Last Chance, the river broadens and slows and wanders somewhat aimlessly through one of Idaho’s premiere state parks, Harriman. There, wildlife—trumpeter swans, otters, ducks, geese, elk and grizzly bears all find sanctuary.

For fly fishermen, this is Holy Water, worshiped and revered for the trout that make their home there. All summer long fishermen gather on the banks, wade the waters and drift past in oar-driven boats, spending big money on guides, meals and lodging at places with names like Trout Hunter.

Just past Pine Haven, the nature of the river begins to change as it prepares for a dramatic exit from the volcanic plateau known as a caldera. The canyon starts to deepen and at Hatchery Ford road’s end, a sign warns boaters that this is the last place to get off the water. The river plunges off the caldera rim in a series of falls only kayakers are crazy enough to try.

Between Hatchery Ford boat take-out and the beautiful Upper Mesa Falls is six and a half miles of river that is remote, and except for a few locations, requires a long hike and steep descent to reach it. Even then, travel along its banks is frustrated routinely with basalt cliffs and fast water. As a result, this defacto wilderness seldom sees a human.

Once below Lower Mesa Falls, the river makes a steady march toward the valley and fishermen have been known to lower their rafts and driftboats almost a quarter of a mile down a long slide into the canyon below to float this river’s last untamed stretch before it enters Ashton Reservoir six and a half miles from where it takes leave of the volcanic rim.

There is no point in resisting the power the Henry’s Fork will have on your soul. Spend just a little time there and its meadows, rushing waters, solitude and serenity, canyons and wildlife will wrap warm and tender fingers around your heart and never let go.