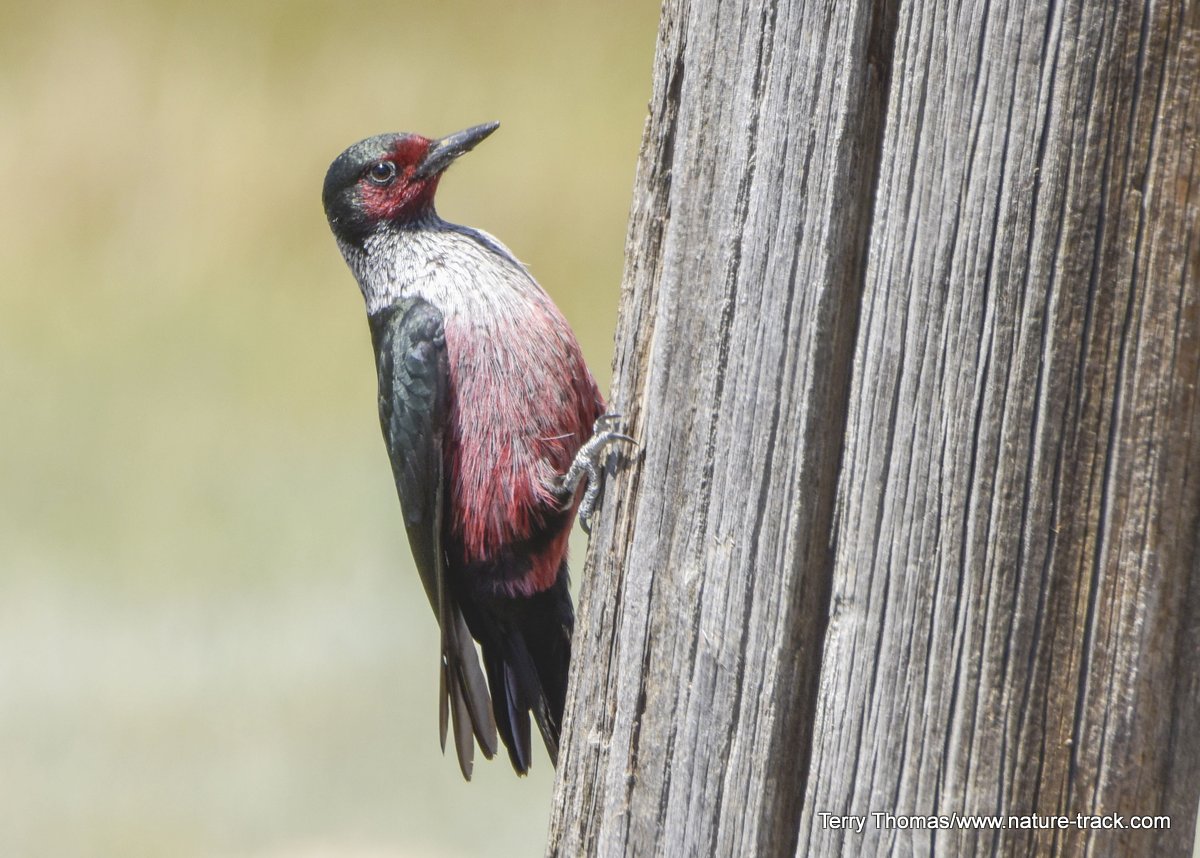 This Lewis’s Woodpecker was hunting insects, flycatcher style, near Market Lake WMA May, 2022.

Even from 200 yards away, I suspected that the bird ahead of us on the road on the west side of Market Lake WMA last month was a woodpecker. With that in mind, it was easy to quickly identify the bird as we drew closer. “It’s a Lewis’s woodpecker!” I exclaimed. Skeptical, my wife quizzed me. “Are you sure it isn’t a flicker?” Afterall, despite the many days we have spent at Market Lake, we had never seen a Lewis’s woodpecker there. In fact, I have only seen one on three other occasions: once near Salmon, and twice on the Camas Prairie near Carey. But even before she had her question completely formed, I nodded an affirmative yes, I was sure.

This large bird, one of the largest woodpeckers in Idaho at 10-11 inches, is hard to mis-identify. It has a rosy pink belly, dark green (sometimes looking black in dull light) back and head, light gray neck collar and chest, spiky black tail and red face. It has the customary stout bill and the standard landing gear, two toes forward and two pointing backward, a.k.a., zygodactyl toes, of a woodpecker.

From there though, it diverges rather strongly from even its close cousins. Woodpeckers, along with finches and sparrows, usually follow a flight pattern called, undulating flight. This up-and -down pattern looks something like the bird is on a roller coaster—the birds flap their wings to rise up and then either glide, wings out, or bound, wings folded, as they descend into the valley—up and down. Lewis’s woodpeckers, on the other hand, have a broader wing and their flight is more of a steady flapping that is often compared to that of a crow.

Most woodpeckers obtain a substantial amount of their food by digging into living and dead trees to harvest the insects hidden in the wood. Not so, the Lewis’s woodpecker. This bird forages more like a flycatcher, sitting on a perch and watching for prey then launching to catch the insect in flight. Acorn woodpeckers and flickers also occasionally capture prey this way, but for the Lewis’s it is a way of life (they also pick lots of insects off the surface of trees).

On wintering grounds well to the south, they will also cache foods, especially acorns and other nuts. They will defend these caches from robbers such as acorn woodpeckers with bold displays and attacks.

Finally, keeping with its seeming aversion toward pecking at trees, Lewis’s woodpeckers do not normally excavate their own nesting cavity. They will use natural cavities or those constructed by other woodpeckers, sometimes enlarging and improving them.

The Lewis’s woodpecker is truly a western species and is a bird of open forests and burns with lots of standing wood. Lewis’s woodpeckers summer in Western and Northern Idaho, Western Montana, across Wyoming, in a small area in northern Nevada, parts of eastern Oregon and Washington and the Black Hills of South Dakota. It is puzzling that we don’t see them more often, but they do seem to prefer stands of Ponderosa pine which aren’t found in Eastern Idaho. They will use other forest types too, so long as they are fairly open, and the range map shows that they can be found in the northeast corner of Fremont County, adjacent to Yellowstone, as well.

At best, Lewis’s woodpeckers are uncommon and numbers have declined by about 48 percent between 1968 and 2019. The organization, Partners in Flight, gives them a “Continental Concern Score” of 15 out of 20, “placing them on the Yellow Watch List for birds most at risk of extinction without significant conservation actions to reverse declines and reduce threats.”

I may be just unlucky in finding Lewis’s woodpeckers or I might frequent the wrong habitats. However, when there are only an estimated 42,000 pairs throughout their range, I suspect that not being able to see them isn’t just my problem.