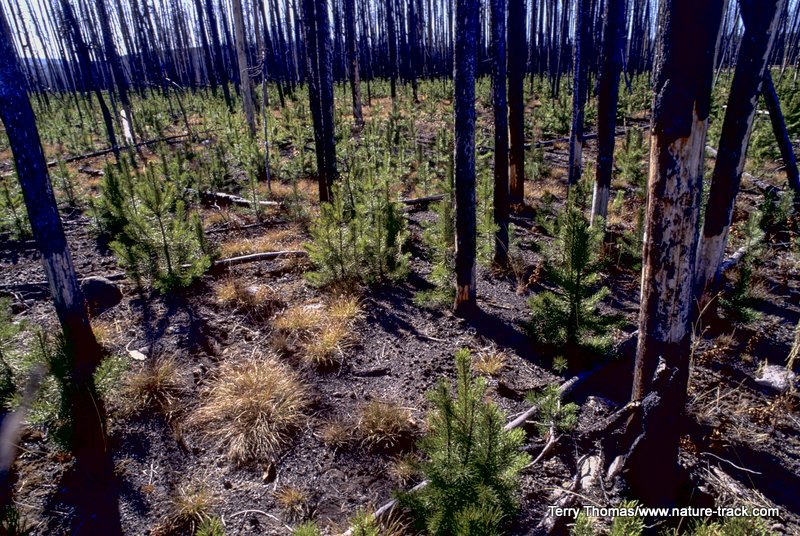 These lodgepole pine seedlings grew naturally in Yellowstone following the fires of 1988. Today they are over 20 feet tall.

A few years after the Yellowstone fire of 1988, I was driving into the Park from West Yellowstone. The blackened landscape was still almost ubiquitous, but there among the charred remains of forests a tinge of green covered the forest floor—a carpet comprised of millions of one-foot tall evergreens—a new generation on the rise.

These lodgepole pine seedlings were the natural result of the fire. This species depends upon stand-replacing fire to maintain itself. The Rocky Mountain subspecies even produces serotinous cones, pine cones where the scales are sealed with resin. These cones can last 50 years waiting for a fire to heat them to the point that the resin melts and the seeds are released.

When the cones open, lodgepoles repopulate the site quickly. Seedling densities can easily reach 20,000 per acre. As the seedlings grow, they create a forest that is nearly impenetrable for any animal much larger than a squirrel. These “dog hair” stands also shade the ground so completely that little if any ground dwelling plants can grow, resulting in what I refer to as a “lodgepole desert”. Over time, these stands will self-thin and the forest will slowly open up as weaker trees succumb to the shading of faster growing relatives.

Lodgepole pines, Pinus contorta, are some of the most recognizable trees in the Western U.S. There are four subspecies and they can come in a variety of forms, including a shrub-like alpine form known as krumholz. Lodgepole pines have evergreen needles 1.5 to 3 inches long, grouped in pairs in most cases, although some subspecies may have one, three or even four needles in each cluster. Needles often have a twist to them as well. Cones are small and hard and each scale has a prickle on it.

In pure stands, lodgepole pine grows straight, slender and tall. A mature specimen may be 110 feet tall at 100 years although they may reach 150 feet tall and occasionally 7 feet in diameter at chest height (although 1-2 feet is more the norm). This long straight growth habit with few lower branches earned the species its common name of lodgepole as Native Americans found the tree to be the perfect support for their lodges or teepees. Today, this same habit is still important in producing utility poles and fence rails as well as long straight dimension lumber with few knots.

The scientific species name, contorta, is a little more curious for a tree renowned for its straightness. The twisted needles are part of the reason for the name, but it mostly comes from twisted and bent lodgepole pines found in subspecies in coastal areas.

Lodgepole pines dominate much of the western forests from Colorado to California and north to the Yukon, Canada. In Idaho, there are at least 2.3 million acres of lodgepole pine forest. Much of Yellowstone National Park is blanketed with this species as well, which is one of the reasons the fires of 1988 were difficult to contain.

Although lodgepole pine is a North American species, Great Britain grows extensive forests of it in its northern regions. Lodgepole pine has a well-earned reputation for thriving in harsh soil and weather conditions and that fit well with some areas of England. However, when New Zealand tried the same thing, lodgepole pine took such a liking to that island nation that it is now considered a noxious weed, one threatening several native tree species.

Lodgepole pines often don’t create the most aesthetically pleasing forests. However, they often grow where few other trees can providing security habitat and timber products where no  other species can.