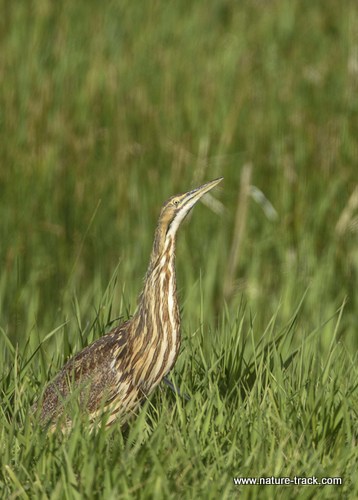 This American bittern at Market Lake WMA is a master of disguise and stealth. Even in plain sight you may not see it.


The onk-a-chonk call of the American bittern at Market Lake was close and unmistakable. In fact, it was almost like a Clint Eastwood/Dirty Harry taunt, “Go ahead punk, try and find me.” And try I did, looking for a bird so well camouflaged that even its behavior of pointing its bill straight to the sky mimics reeds and cattails. Even when calling, this bird can be very hard to find indeed and I finally gave up. Again.

A visit to a marsh like Market Lake WMA or Camas NWR is sure to yield a wide variety of birds to even the casual observer. Species like white-faced ibis, avocets, mallard ducks, California gulls and songbirds like swallows, red-winged blackbirds, meadow larks and song sparrows, and raptors such as short-eared owls, harriers and red-tailed hawks are easy to see.

There are other birds though, the American bittern among them, that are difficult to find and are rarely seen despite sometimes being relatively common. They are shy and prefer to stay in the thick of cover. They can fly but usually use stealth and cautious wandering rather than flight.

These birds are called secretive marsh birds. They are not necessarily related to each other but all have secretive habits. Species include soras, Virginia rails, American and least bitterns, pied-billed grebes and Wilson snipe.

Fewer years ago than I like to admit, I had to ask, “what’s a sora?” because I had never seen or even heard of a sora. I actually saw my first one in Florida, not Idaho. Yet they are quite abundant in our area and throughout most of the United States. Secretive marsh birds are often more common than people realize but a comprehensive, efficient monitoring program that tells biologists the status of their populations can be difficult to achieve. Monitoring a population of birds you can’t see is tough but it is still necessary to help biologists manage and conserve them and the environments on which they depend.

If you want to see some of these marsh birds, start by listening to their songs and other vocalizations. Birding Apps like Audubon Birds and Cornell’s Merlin Bird ID (a free app) have recordings of the different sounds these birds make. You can also find vocalizations on the Cornell website: www.allaboutbirds.org. You might be surprised to learn that you have been listening to them for years without knowing what they were.

Once you have heard the songs, visit a marsh and just listen. Once you hear a bird calling, you can start carefully looking at the base of the vegetation in that area. This will take patience. These birds often stay still for long periods and are not easily spotted.

Finding one of these reticent birds is challenging but can be a lot of fun. The first time I actually saw the American bittern this year, I nearly fell over. I had been staring at it for at least a minute before I realized that it was a bird and not just some old cattails.