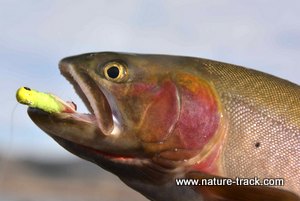 The Fish of Henrys Lake was the first topic I wrote about for the Post Register Nature Column.

Twenty years ago, I answered an ad in the Post Register. It was a call for “nature writers” for a new column starting in the Post. I gathered up some writing samples from a few national magazines I had been published in and drove down to the Post Register office on Northgate Mile to meet with editor Tom Szaroleta.

Myself and three others were selected. With a B.S. in fisheries science, I was chosen to be the aquatic specialist and my first column, almost 900 words on the fish at Henry’s Lake, was published 20 years ago this month.

At that time, I could have never envisioned where this column would go. I hoped it would last for a few years. The first sign of change was when David Hayes, in my opinion the best writer among us, took his own life. The three of us continued on, filling in the blank. Not long after, the two other men, whose names I have long forgotten, either quit or moved and it was left to Charlene Kaserman and I. For several years we tag-teamed the column.

When Tom left for a gig in Florida, Maggie Walsh became the editor followed by Rob Thornberry. With Rob came some changes—for starters, he wanted the column to be only 400 words. I successfully argued for 500 words, but he wouldn’t budge on even one more word. Painful though it was, I think that made me a better writer. About this time, Charlene took her leave and I became a weekly columnist.

In the ensuing years I have written over 900 columns. I have written on a variety of topics, covering the full gamut of nature. Based on the many responses I have had, I think I have been on target much of the time. There were a few columns that I wasn’t especially proud of, some I could not write while I was employed by Idaho Department of Fish and Game and on a rare occasion, I repeated a topic, but I have never re-submitted the same column.

Since I have been keeping accurate records (invoices were another Thornberry innovation—thank you Rob) beginning in August 2004, the column has only missed being printed weekly a total of seven times. Two were because Christmas fell on a Thursday and there is no paper on Christmas, and three were because I just couldn’t get to it. Two others were a decision by the paper. I am okay with that record.

Did I do it for the money? I still get paid the exact same small amount as I did 20 years ago except these days I add a photo and a caption. The average price of a gallon of gas was $1.06 back then, compared to three times that today. Looked at that way, I have taken at least a 33% cut in pay since I started. Not a great business model. So, while the extra cash has been great, it has rarely been the motivator. The chance to write, to entertain, to educate and perhaps to influence a mind or two on the importance of nature have been the motivations.

In 2013, I wrote a book, The Best of Nature, a compilation of 109 of my favorite re-worked columns. The book wasn’t a best seller by any means, but I did appreciate those who bought it and either read it or gave it as a gift.

In truth, I have gained far more than anyone from these efforts. Despite my profession as a wildlife biologist, most topics required significant research to ensure accuracy and I learned a lot.

Today I want to thank all those who made this ride possible—the Post Register and the editors, to be sure, and especially my wife for tirelessly proofreading and occasionally offering painful but necessary criticism. Mostly though, I would like to thank faithful readers over the years, welcome new readers and especially thank all those who have, in person or by email, contacted me when a column struck a chord, inspired an adventure or recalled a memory. I have appreciated the kind words and support. I also value those who took my occasional mistakes and misstatements in stride, gently correcting me when needed. Thank you for taking the time to let me know that my efforts haven’t been in vain.

I don’t know what the future of the nature column will be. The paper is now under new ownership and I have had two different editors since Rob left the paper. Both have been great but they don’t control the show. From my perspective, I will stay with it for as long as you the readers and the paper will tolerate me.