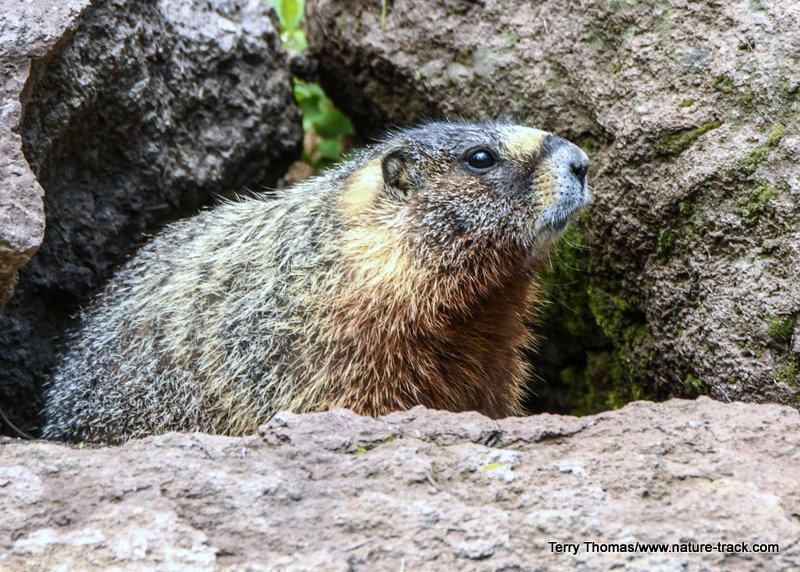 A marmot occupies a prime location on the rock wall just feet from my deck. Should I let him live or send him to his ancestors? I can’t decide.


I am torn between donning my warrior’s armor or slipping on the robes of peace. We could become friends or foes, allowing give and take, although my fear is that I would do all the giving and they all the taking.

A family of marmots has occupied the rock wall just feet from my new home in Island Park, something the previous owner warned me about. His position was clear and he used a .22 rifle to combat the situation.

I am of two minds here because I like to watch and photograph marmots. I have never killed one for sport or out of necessity and I am not sure I want to start now. They are reported to be good eating but I doubt that we would be able to cook one. On the other hand, my home defense instinct is strong and according to the former owner, marmots can damage the hill with their tunneling, and who knows what other mischief they might cause.

Yellow-bellied marmots, Marmota flaviventris, are common mammals throughout much of the western part of the United States and Southern British Columbia (Lewis and Clark first noted sighting them on April 24, 1806 on the Columbia River in the state of Washington).

Marmots love rocky terrain as those living on my property demonstrate. They stay close to the huge boulders that make up the retaining wall and dive into their holes at the hint of danger.

Although yellow-bellied marmots can be found up to 11,000 feet, right now they are easy to see, even in the lower elevations of Idaho. They find many of the roadways and adjacent rocky areas to be to their liking and you can see them along highways and in open fields in many places. Perhaps the easiest is the Hell’s Half Acre rest area just north of Blackfoot on Interstate 15. Marmots are common there on both north and south bound lanes where they are frenetically gathering green food, raising families and preparing for spending another eight months asleep.

It should go without saying that the yellow-bellied marmot has a yellowish belly, but they are yellow-brown-black on top.  A conspicuous whitish muzzle is prominent and a light patch bounded by a black saddle below sits almost between the eyes. Buff patches are behind the ears. Shoulders and feet may be brown or yellow, but never black.  They can be a heavy bodied animal weighing up to 10 pounds and 28 inches long including the bushy tail.

There are 11 species of marmots, five of which occur in the United States. I have only seen one other species, the hoary marmot, on a mountain trail above Juneau, Alaska, so I still have three species to go.

Marmots may not be huge, but they can be scrappy fighters when cornered. As a young conservation officer, I remember getting a call to remove a snapping, snarling animal from underneath a man’s truck. He was terrified to approach his vehicle while what he described as half wolverine and half Godzilla was underneath it. He claimed that every time he got near, the thing would bench press the truck a couple of times and double in size before his eyes. He refused to believe that the animal I removed and released in the nearby field was a mere frightened rodent, a yellow-bellied marmot.

I may never confess whether I choose war or peace with the marmots occupying my rock wall. I will feel like a traitor to my principles either way.