A New Paradigm for Idaho 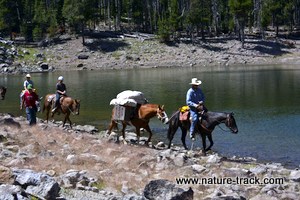 With 60 percent public land, Idaho has the potential to be the recreation capital of the West. Idahoans just need to embrace a new paradigm about what Idaho is and could be.

As political campaigns continue to ramp up, two topics seem to be emerging in virtually every race. The first is a game of one-upmanship where each candidate tries to prove he/she is more conservative than the opposition. The second revolves around the large tracts of publicly owned land, usually referred to as “federal” land and how it should be managed.

A major complaint by those hoping to be elected is that Idaho is over 60 percent public land. I specifically use the word, “public” in favor of “federal.” Public reminds us that these lands belong to all of us, not to the Forest Service, the Bureau of Land Management or the timber, grazing and mining industries.

The chanted rhetoric is that Idaho needs to “get back our land.” In reference to federally managed public land, that statement is disingenuous. It misleads by implying that these lands once belonged to the state and were wrested from state control by a heavy-handed federal government. In fact, these lands were public lands before Idaho gained statehood and have never been state owned or controlled.

The rub seems to be that for nearly 100 years, industry ruled over these public lands. But now, the American people, you and I, demand more accountability and full consideration of all the values these lands produce. That runs counter to an extractive profit-oriented culture.

But there is another way. I would like to offer a different paradigm for the future of Idaho’s resources. It seems clear that the only way forward to a stable and vibrant outdoor-based economy is through sustainable activities. Timber has a rotation of 40-100 years, making it unsustainable in a given lifetime. By definition, mining is not sustainable as eventually all supplies of minerals end. Grazing comes closest to a renewable activity and can be compatible with other resource uses when done properly. Carefully done in moderation, these resource uses can play into a long term economic plan.

However, instead of complaining about having a state that is 60 percent public land, Idaho is in a position to embrace that fact as a unique value not shared by the majority of states. It is a hand full of aces that we continue to keep tucked up our sleeve while trying to win the game with a pair of eights.

Recreation in every form is fully sustainable in the short and the long terms and thrives on public land. We have what much of the nation craves: wide open spaces with lots of outdoor activities. Rather than fight that and push for unsustainable levels of extraction, I say get creative, play for the long term and embrace the one thing that makes Idaho exceptional.

There are just three things we have to remember:  no resource is limitless, they belong to everyone, and renewable uses are the only way to a secure future. A new paradigm for Idaho will embrace these concepts and will build a sustainable tomorrow.

P.S. This Saturday I will be signing copies of my book, The Best of Nature, at Barnes and Noble in the mall from 1 p.m. until 3 p.m.  I hope to see you there.