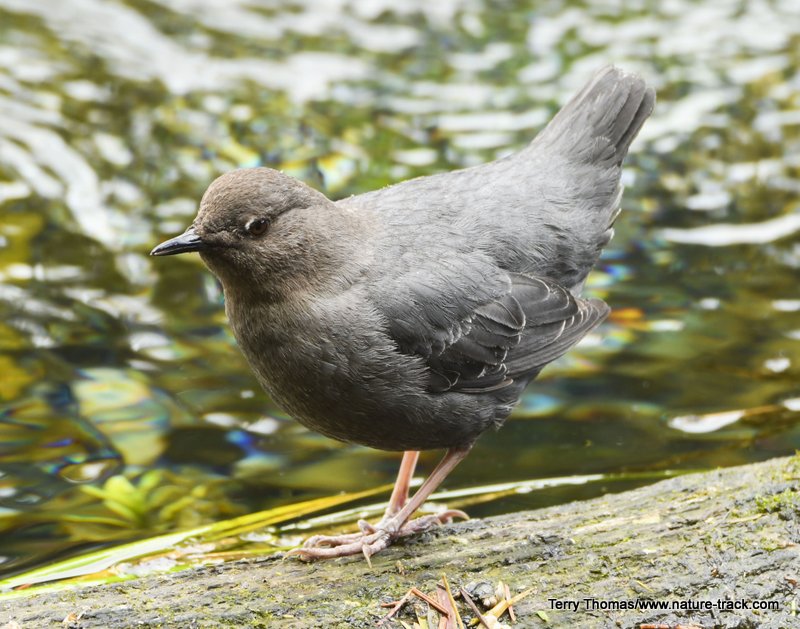 An American Dipper is a somewhat plain bird on the outside, but it can do some amazing things.

A small songbird popped out of the rushing waters at Big Springs in Island Park. It was rather plain with a slightly brown head, gray body and clownishly short tail. Each time it blinked I saw a flash from white eyelid feathers. I recognized it immediately though as it sat preening on a rock near the water and unconsciously dipping up and down like it was doing deep knee bends. It was an American Dipper, so named because it is a resident of the Western US, Canada and south to Central America and has its characteristic dipping behavior.

Over 150 years ago, John James Audubon drew this bird in one of his famous illustrations. Called plate 370, he called this bird, American Water Ouzel, Cinclus americanus. The water ouzel name has since faded in favor of American Dipper and even the scientific name has changed to Cinclus mexicanus, despite the fact that 80 percent of the dippers live in the USA.

This curious bird breaks the norms of most songbirds. First, dippers (there is a European counterpart) are the only songbirds to make a living under water. They swim but also walk on the bottom of fast-moving mountain streams and rivers while they look for their prey, aquatic insects. Dippers aren’t particularly social, spending much of the year alone. They also do not migrate unless they need to find ice-free waters, but even then, they don’t move farther than necessary.

Dippers have several modifications that allow them a lifestyle on the bottom of cold mountain streams. First, they sport a nictitating membrane, a transparent horizontal-moving eyelid that protects the eye while still allowing the bird to see under water. In addition, the dipper has more natural oils in the feathers than other songbirds. This helps the feathers to shed water. Third, compared to most songbirds, dippers have a thicker layer of feathers, again as protection against the cold water they spend so much time in. Finally, dippers have a lower metabolism and higher oxygen carrying capacity in their blood cells to cope with winter and cold water.

Unlike other songbirds, but similar to ducks, the American Dipper molts wing and tail feathers all at once late in the summer. During this time, the birds are flightless.

American Dippers are often considered indicators of habitat quality in streams and rivers. They prefer clear unpolluted water. When water becomes polluted with silt or chemicals, dippers often seek out other areas. This may be in part because aquatic insects, their primary food, are less abundant in polluted water.

There is one last thing about American Dippers. Many of us remember Susan Boyle’s 2009 performance on Britain’s Got Talent. A frumpy school-marm looking 47-year-old woman took the stage and the crowd was almost jeering. But when she opened her mouth, the jeers turned to joy as the air resonated with her rendition of, I Dreamed A Dream, from Les Miserables. The American dipper, plain and ordinary looking, also has a surprise for anyone lucky enough to hear it sing. Its song is vibrant, melodic and beautifully complex. Males and females both sing, and unlike most songbirds, do so all year. The dipper is a reminder that it is not what is outside, but rather, what is on the inside and what music we make with what we have that counts. That is the light that we must let shine.