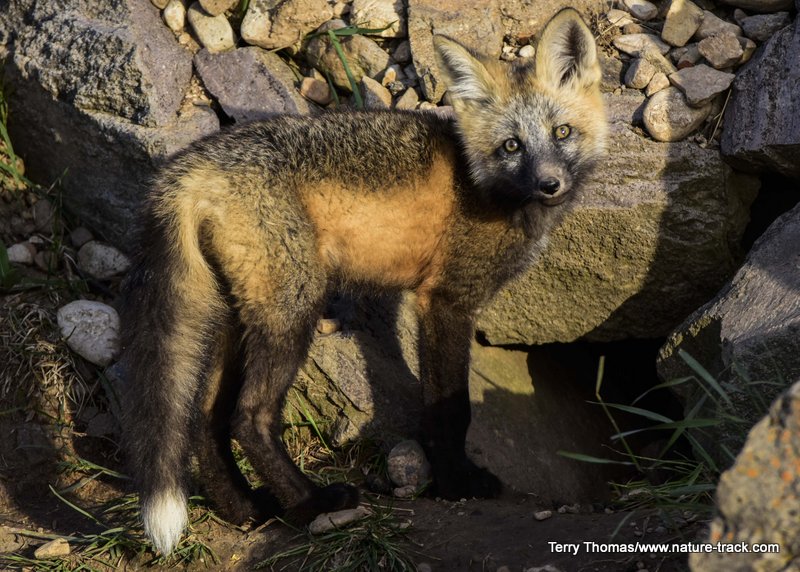 Whether you call them cubs, pups or kits, young foxes are always fascinating to watch.

We spent a few mornings and afternoons last week watching the occupants of a fox den. When lulled into security by our unmoving presence, a few half-grown pups would emerge from the den to soak up the sunshine, wrestle with siblings or explore the neighborhood. These cubs will leave the den in a few short weeks to face the world and see if their training has been sufficient to keep them alive.

My May 2020 page of the Wyoming Wildlife calendar calls young foxes kits, and indeed, any of the three names, kit, pup or cub, seems to be acceptable in this case. So, what are other young animals called?

Many, if not most, young birds are called chicks. There are some notable exceptions though. For instance, young swans are called cygnets, derived from cygne, Old French for, you guessed it, swan. Sandhill crane babies are called colts and their mothers are mares. A young pigeon is a squab, a young turkey is a poult, all young ducks are ducklings and young geese are goslings. A young hawk is an eya, a baby eagle an eaglet, a young peafowl is a peachick and a young puffin is a puffling.

A wide variety of vegetation-eating animals such as rhinoceros, giraffe, reindeer, elk, bison, elephant and moose have young called calves. This is also what the offspring of sea-dwelling mammals such as whales, porpoises and manatees are called. However, youngsters of most deer and antelope species are called fawns, goats have kids, zebras have foals and sheep have lambs.

Predators of a number of types seem to go with “pup” for their young. This includes sharks, wolves and coyotes (although they may also be called whelps), sea lions and otters (although here again, whelp will also do). However, bats, beavers, moles, prairie dogs and armadillos all have young called pups as well.

Bears, mountain lions, tigers, cheetahs, hyenas, African lions and jaguars all have cubs. And the off-spring of smaller felines such as bobcats, lynx and ocelots are called kittens.

Marsupials and all apes use a single name for their individual off-spring. The young of any marsupial, whether it be a kangaroo, wombat, wallaby, koala or opossum, is a joey. The young of all members of the ape family are called babies.

Kit is a fine word for the young of a number of species besides foxes. Although other names may apply as well, muskrats, weasels, rabbits, badgers and squirrels all have young called kits.

In the reptile-amphibian world there seems to be a paucity of creativity. Baby alligators and baby turtles are just called hatchlings and baby snakes are usually called snakelets. A young newt, however, is called an eft, a name with mystery and class, and before a frog is a frog, it is a tadpole or a polliwog, both names with merit.

There are also some animals that have specific and sometimes obscure names for their babies. A young boar or pig is a piglet, shoat or farrow, a llama youngster is a cria, a young hare is a leveret and the young of mice and rats are often called pinkies.

I think my favorite names are for the baby porcupine and the baby platypus. One is a porcupette and the other is a puggle. Those names are hard to beat.