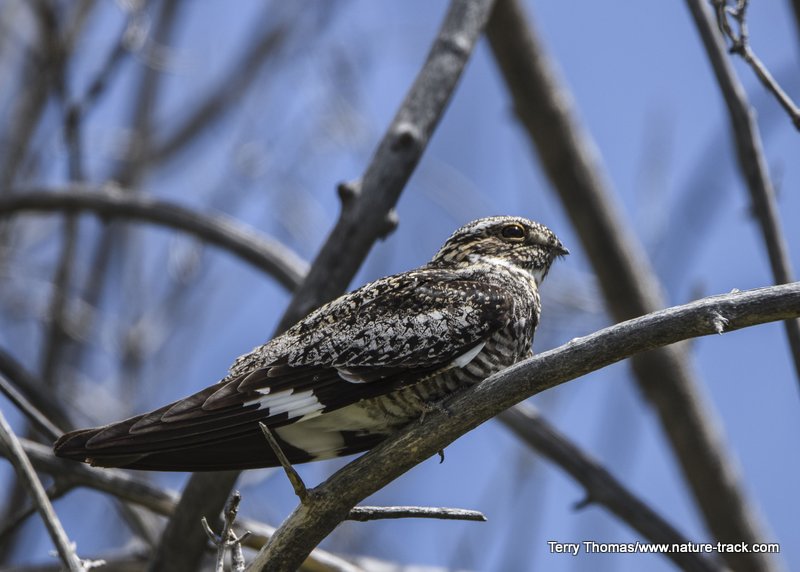 A common nighthawk rests on a tree branch at Camas National Wildlife Refuge.

Half a dozen birds swooped across the sky on long pointed wings at Camas National Wildlife Refuge several weeks ago. They were moving so fast in an erratic bounding flight that it was hard to track them with binoculars, but when we could “lock on”, a white wing patch was easy to see about two thirds the way toward the tip.

It was almost noon and it was a bit surprising to see so many common nighthawks foraging at mid-day. As the sun goes down, most birds, owls being the notable exception, are headed for a safe place to roost for the night. This isn’t the case for the common nighthawk though. While the “night” in nighthawk is a little extreme, they seem to prefer the times just before dark and before sunrise when their primary prey, insects, are active. As we noted though, they can be active anytime in a 24-hour period and are often found foraging all night long on moonlit nights and around lighted areas that attract insects.

Other than the prominent wing patch that can sometimes be visible at rest and a white Vee under the chin, also visible during flight, the common nighthawk is well camouflaged in a mottled pattern of gray, brown, white and black. Since these birds nest on the ground, their coloration helps them to hide in plain sight.

Common nighthawks are members of the nightjar family of birds which includes nightjars, nighthawks, poorwills and whip-poor-wills. Despite their name, they have little ancestral connection to true hawks. All have large eyes, flat short bills and short necks, giving them a chunky big-headed appearance.

There are a lot of ground-nesting birds and common nighthawks are not unusual in that respect. What makes them different from most is that the female makes no attempt to form a nest of any kind. She just plops out two eggs right on the ground. In fact, in many cities, common nighthawks chose flat rooftops when suitable ground nesting isn’t possible.

The normal call of the common nighthawk is a sharp high-pitched “peent” sound. If you don’t like fingernails scratching a chalkboard, you won’t like this sound either. More interesting though, is the sound the male makes when courting and driving off intruders. He flies straight at the ground, pulling up just a few feet short. The air across hisses across his tail feathers creating a loud noise called a boom.

The only part of the common nighthawk’s name that is absolutely correct is the first name. They are indeed common breeding birds throughout north America almost to the Arctic Circle (they don’t quite get to Alaska).

The future may be changing for the common nighthawk though. Over a 50 year period (1966-2014), nighthawk populations have dropped by 61 percent in the United States, earning the bird the title of, “a common species in steep decline,” in the 2014 State of the Birds report. Like most other species in decline, habitat loss tops the list.

With nighthawks however, there is another factor thought to be seriously affecting populations—mosquito control. Mosquitoes are a mainstay of common nighthawk diets and it doesn’t require a degree in ecology to recognize that less food means less nighthawks. When nighthawk and other mosquito predators decline, humans will be forced to take on more mosquito control each year.

The next time you are out in the evening, watch for fast flying acrobatic birds. Chances are good you will spot the telltale white patch under the wing and know you are watching a common nighthawk capturing its dinner on the fly.