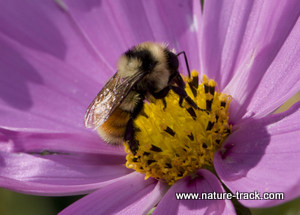 Bumble bee flight doesn’t defy the laws of aerodynamics but they are still interesting and important native species.

“According to the laws of aerodynamics, bumble bees cannot fly,” stated the motivational speaker emphatically. “Their bodies are too heavy for the wings to lift.” Then he sagely concluded, “But don’t tell that to the bumble bee.” His point was clear: Since bumble bees don’t read physics texts, they do the impossible, so don’t let anyone tell you that you can’t do something.

I wholeheartedly agree with the sentiment, but it is based on an old wives’ tale. Bumble bees don’t defy the laws of aerodynamics. They just exploit a process called non-linear dynamic stall that builds a temporary vortex on top of the wing. As this vortex moves from front to back, it creates up to three times the normal lift. There is no magic, just the physics of wings that move fast and rapidly change angles.

There are about 50 species of native bumble bees in North America. They may be small as a honeybee or as large as a quarter, “furry” and usually are a combination of black with orange, yellow or white.

You may hear a bumble bee before you see it because of its ominous buzzing. This was once thought to be wing movement but the bumble bee can buzz without moving its wings. Buzzing results from the rapid vibration of the wing muscles which can be disconnected from the wings.

Buzzing is useful in several ways. Bumble bees use it to warm their bodies just as ground squirrels waking from hibernation use shivering. Some queen bumble bees buzz to warm their eggs and hasten development.

The buzzing serves another purpose as well. When a bumble bee grabs onto a blossom and buzzes, the vibration can dislodge even the most stubborn pollen from the anthers. Known as sonic or buzz pollination, this is key for pollinating about eight percent of the world’s plants. Tomato growers routinely house colonies of bumble bees in their greenhouses as honeybees are very poor tomato pollinators.

Like the non-native honeybee, bumble bees are social insects.  The colony starts when a single queen emerges from her winter hibernation where, like a bear, she has been surviving on fat accumulated the fall before. She immediately seeks a pollen source from an early blooming species such as willow. Then she finds an appropriate home—

an abandoned mouse hole is about perfect—for her new colony.

She lays a few eggs and gathers provisions for them. After these hatch, grow and then pupate, she lays another batch. Once the first group, all sterile worker bees, hatches, the queen will rarely leave the nest, concentrating instead on producing up to 400 offspring.

Near the end of summer, one of the last batches of eggs becomes males and new queens. Queens and males mate, queens head off to find shelter to overwinter and workers and males await their fate.

While it may be a myth that bumblebees defy the laws of aerodynamics, there is still plenty to admire about these cute, essential native bees.