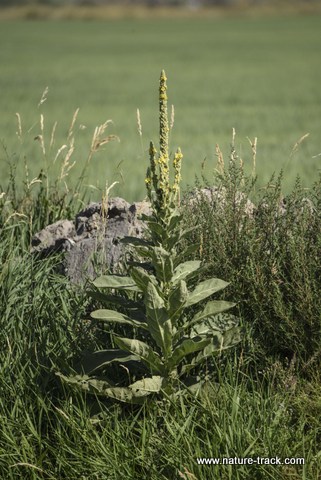 Common or woolly mullein, an invader from Eurasia, is not as benign as once believed. It is taking over thousands of acres of habitat across the West and Midwest.

I was at The Nature Conservancy’s Silver Creek Preserve near Carey, Idaho a month or so ago. In their pollinator garden was a huge plant with hairy leaves and a long single seed stalk just starting to form. I recognized it at once as common mullein, also known as woolly mullein, a pervasive weed in much of the country.

I asked the caretaker if I could pull it out and he laughed and told me that he had asked the same question and was told an emphatic “NO!” and that he would understand when it started to flower.

Now, I get that the flowers can be attractive to pollinators and we need to encourage and help pollinators every chance we get. However, mullein is an exotic weed, native to Eurasia. It is aggressive and outcompetes native plants.

I remember many years ago seeing a lot of mullein alongside roads in the Big Lost valley. I questioned a weed expert about that, wondering why this obvious invader wasn’t being determinedly treated with herbicide. He told me not to worry, that, “It won’t go anywhere.” This viewpoint was common among weed eradication professionals and is typified by this statement from my Wildflowers of Craters of the Moon National Monument app on my cellphone: “Fortunately it [mullein] doesn’t compete well and isn’t considered a very serious weed.”

I can’t disagree more. Last year in South Dakota, we saw thousands of acres dominated by mullein. When I say dominated, I mean there was mullein and just about nothing else. That is serious. Closer to home, I have watched mullein steadily march into healthy habitats of all types, overrun marginal slopes and spread to just about every corner of our world.

South Dakota has caught on to the threat of mullein and classifies it as a noxious weed and landowners are required to control it. Idaho is still behind the times. Mullein is not officially a noxious weed here but certainly makes the obnoxious weed list.

Mullein is in bloom right now and is an easily recognized plant with its yellow-flowered spikes. It is a biannual, meaning that the first year it forms a rosette of leaves and develops a large taproot. The second year, the leaves grow and a stem with one or more spikes bolts up to five feet tall. The leaves of the mullein are large and densely covered with soft fuzzy hairs earning it the nickname, “scout toilet paper”. These same hairs make it almost completely unpalatable to wildlife and livestock.

Once established, mullein is extremely difficult to eradicate, especially in a native setting. A single mullein plant can produce from 100,000 to 180,000 seeds that may persist in the soil for 100 years.

That is where you and I come in. Whenever we see a mullein plant, especially a single plant or small group, pull it up. Even large plants often pull out fairly easily or the taproot can be cut with a shovel. This is absolutely the best way to keep mullein from becoming established.

In several of my favorite haunts, I make it a practice to pull up every mullein I see. Once the seeds ripen, I very carefully cut the seed spike off with clippers and drop it in a bag. Over time, my efforts have dramatically reduced the number of mullein in those areas, maintaining them for wildlife.  I invite you to join my crusade to help keep mullein from spreading any further. Dig, pull and cut this weed out of existence!