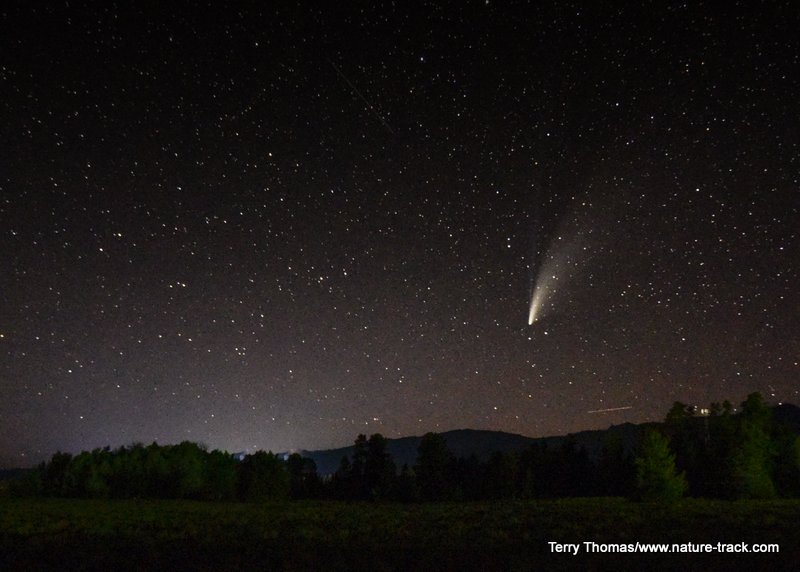 Some good friends from my distant past were visiting last weekend and, after an already long day, we decided at 10:30 p.m. on one more outing, to see the comet C/2020 F3 a.k.a., Comet Neowise. Actually seeing a comet is a rare event and seemed worth the effort.

We drove just a few miles from home out onto the Old Shotgun Road off Island Park’s Yale-Kilgore road and when we saw a car alongside the road with occupants staring at the sky, we figured we had gone far enough. We bailed out and sure enough there in the northwest night sky, below the Big Dipper constellation and about two fist widths above the horizon (a fist width held at arms’ length is 10 degrees of the sky), was a long triangular glow. Binoculars and a spotting scope made it even better.

Comet Neowise is named for NASA’s space telescope, Wide-field Infrared Survey Explorer (WISE), launched in 2009. This telescope was specifically tasked with photographing all of space it could see, a project that it accomplished in two years. Then the coolant needed for the infrared photography ran out and the telescope was put to sleep for a few years. When scientists woke it back up, it was with a new task, one that could be accomplished without the coolant. It was now tasked to look at “near Earth objects” such as asteroids, meteors and comets, thus the first part of the name, NEO.

On March 27th, 2020, the space-based telescope discovered the comet we are now seeing. This comet is far brighter than most other comets and can be observed with the naked eye. At first it was low enough that it could only be seen in the early morning, but now it is easily seen shortly after twilight if you are in a dark-sky location.

Comets, often called “cosmic snowballs”, are chunks of ice (about 13 million Olympic swimming pools of frozen water in Neowise), rock and dust hurtling through the sky and orbiting the sun in huge elliptical paths. This one is estimated to be three miles wide, average for a comet and far smaller than Halley’s comet. Like other comets, Neowise sports a trailing tail of dust that may be up to 10 million miles long. Another tail of ion particles can sometimes be seen and scientists believe that Neowise may have a third tail, this one of sodium.

Comet Neowise has drawn far closer than when it was discovered about 160 million miles away and about 25,000 times fainter than the dimmest star. It passed within 27.3 million miles of the sun on July 3, when it was subjected to temperatures of up to 1,100 degrees Fahrenheit. But unlike two other comets this year that did not survive this close encounter, Comet Neowise did survive.  As its orbit takes it away from the sun and us (it reached its closest point to the Earth yesterday, July 22), it is now at 64 million miles from Earth and counting (it is traveling at 40,000 miles per second). We get a show that will disappear quickly as it moves away from the sun.

Scientists suggest that a very fortunate human will only get four opportunities to see a comet with a tail in a lifetime.  I was around for Halley’s Comet in 1986 (but will likely miss the predicted return in 2061) and photographed Hale-Bopp in 1997. This may be the last comet I will ever see and it won’t return for about 6,800 years. Comets are unpredictable and I don’t know about you, but I just can’t pass up opportunities like that anymore. Catch this one before it is gone.