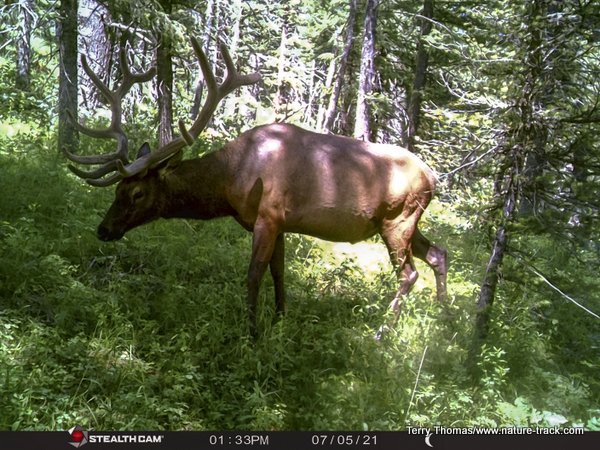 It has been fun and educational to watch antlers develop from a small basket to large, even-pointed 6x6 antlers on this bull elk.

In the first photo I saw of him, his antlers were small and matched his coat in color, which was the rich brown of a summertime bull elk. Over the course of the last month or so, my trail camera has repeatedly caught images of him and several friends. Most of the images were during the dark hours and quality suffers, but they have been a good documentary of the growth of the antlers of this bull. With still perhaps a month of development to go, he is looking like a fine specimen with long beamed antlers and tines, likely significantly larger than last year’s pair which he probably shed around April this year.

Antlers are unique to the deer, or Cervidae, family of animals, including, deer (many types), elk, moose and caribou. They are also unique in that they don’t participate in the support functions of the skeletal system, provide attachment for muscles, protect internal organs or move with other bones. They grow all summer for the single purpose of intraspecific combat for the right to breed—a series of contests that lasts about two months.

Antlers grow from protuberances on the frontal bones of the skull in males (there are some exceptions to that male thing). These bumps are called pedicels. That isn’t news, but what might be surprising is that the antler cross-section, or width, does not exceed that of the pedicel but always matches it. So, the pedicel grows wider as the bull or buck ages in order for the animal to achieve larger antlers.

Growing antlers are mostly water. The dry matter of a growing antler is 80 percent protein. As the antler cures or dries, this is reversed. A hard antler will have a very low water content.

As the antlers grow, they are covered in velvet, a soft protective growth that feels, well, like velvet. The tips of the tines are rounded and while not in final form, are still quite handsome. Antler growth is partly driven by genetics, but requires excellent nutrition as well to reach full potential. Through the velvet and internal blood vessels, the growing antler is supplied with the nutrients required to grow up to an inch a day. At that rate, this bad boy will be quite a bull come breeding season.

Antlers begin to grow in response to hormones and day length. As the days grow longer, melatonin production is suppressed, allowing hormones, principally testosterone, to increase. The hormones stimulate the growth cells, the pedicel begins to swell and velvet skin develops atop the pedicel.

Antler growth occurs at the tips of the antlers. The bases are the oldest material and are the first to harden as the process of growth draws to a close. The outside of the antler is also harder than the inside, but until the antler hardens completely the antlers are more like cartilage and are easily damaged.

Researching the actual growth processes of antlers felt like wandering in another world. It was full of unfamiliar terms and complicated descriptions. One take away point however, is that the complex process of antler growth is still not fully understood. For instance, how antlers branch uniformly on both sides or look similar from year to year remains a puzzlement. The initiation of velvet skin is also poorly understood.

Harvesting velvet antlers from captive animals is a big business, particularly in New Zealand. The antlers are dried and processed into a number of dietary supplements reported to aid just about every human ailment. However, WebMD.com reported that there are no verified significant human trials vindicating any of these claims.

I am excited to see just what this bull looks like at the great reveal when he rubs off the velvet. I hope he keeps posing for my trail camera.