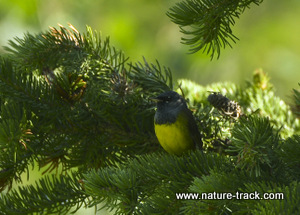 McGillivray’s warbler is a beautiful and common native bird that can be found in thick brush in clearings and alongside streams. 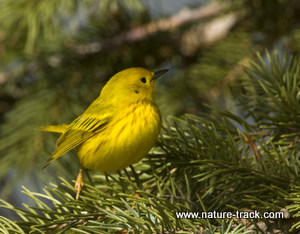 Yellow warblers are also common in our area and their yellow color make them very easy to see.

When my wife pointed out the tiny yellow-chested bird with the slate gray head I knew I had seen it before. Miles up a trail though, all I could do was snap a few photos to compare to the bird identification book when we returned to the truck. It turned out that the bird was a McGillivray’s warbler, a common bird in our area.

In the United States and Canada there are 56 species of warblers in eight families. But calling a bird a warbler isn’t always about blood-relationships. Some warbler families are closely related but others have developed from quite different parentage.

What all warblers share are body characteristics, a result of what scientists term convergent evolution. Similar characteristics develop in unrelated groups in comparable environments. For warblers, that means a small body, thin pointed bill, relatively short wings and a voracious appetite for insects. Most tend to prefer thick understory such as riparian areas but warblers can be found in just about any habitat type.

Some warblers are a little plain, but many are beautifully patterned. Yellow seems to be a predominant color among warblers. However, there are blue-hued warblers, black and white warblers and dramatic combinations of blacks, greens, grays and orange.

Given the name, warbler, one would expect all warblers to sing like opera stars. After all, the word, warbler, comes from the Old French word, werbler, which means, “to sing with trills and quivers.”

But even there, warblers aren’t all alike. Warblers are songsters, and some warblers are incredibly talented, singing complex melodic songs. But others have raspy trills that wouldn’t win them a spot on a rap music band.

Besides the McGillivray’s warbler, another popular warbler in this area is the yellow warbler. This beautiful, tiny lemon yellow bird with chestnut streaking on the male’s breast is one of the easiest of all birds to see and identify.

Warblers are some of the most migratory of species, spending much of the year in transit. They raise their young quickly and then begin to move toward winter habitat. Warblers migrate hundreds to thousands of miles finally settling down for a few months in southern states or even South America. Although much is yet to be learned, one thing researchers have learned is that many warblers don’t take the same route each time. Spring migration may be very different from fall migration.

Warblers are considered some of the most challenging birds to identify. Seasonal plumage changes, hybridization, female versus male, juvenile versus adult all increase the de-facto number of warbler “species” from 56 to hundreds.

Add to that their seemingly endless movement and they can torment even experienced birders. They can be such a challenge that a recent publication, The Warbler Guide, has been devoted to just these 56 species.

As a novice birder, I have learned a few of the easy warblers. But I can tell from the number I haven’t been able to identify, The Warbler Guide is going to make it to my bookshelf sooner than later.