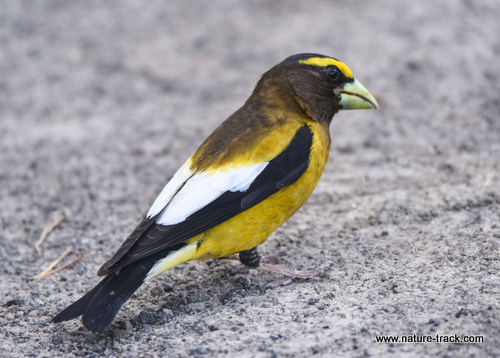 Evening grosbeaks, like this male at Harriman State Park, are a treat to see any time.

As I pulled into a parking space at Harriman State Park for Heritage Days last week, a small flock of birds flushed from the gravel. I didn’t pay them much mind at first, thinking instead how to best set up my display to sell a few more copies of my book. But then a flash of color caught my eye and I reached for the binoculars.

Suddenly, they weren’t just birds, they were evening grosbeaks, handsomely attired in yellow, black and white. My mind immediately retrieved a memory of my first encounter with evening grosbeaks at a birdfeeder on my deck in Kamiah, on the Clearwater River of North Idaho. Since then, I have only seen evening grosbeaks on occasion, making each chance meeting a special pleasure.

I watched these birds as they hunted for just the right gravel pieces to aid in digestion or perhaps seeds wedged in and among the gravel. They weren’t especially shy and allowed me to grab a couple of quick photos.

From the accompanying photo, it is pretty easy to see where grosbeaks get their name. All grosbeaks have enormous bills for their size. The bill is conical and thick, capable of crushing seeds far larger than other seedeaters, such as pine siskins and redpolls, can handle. Smaller seed eaters often follow evening grosbeaks at feeders to glean from their scraps.

Grosbeaks are members of the finch family, but are far more heavy-bodied than most finches. The male is the more colorful of the sexes, with a dark head, yellow eye stripe, yellow chest and white wing patches on black wings. Females and juveniles are mostly gray with black and white wings. They also have a greenish bill while the male’s bill is lighter colored.

Evening grosbeaks are western birds and were once rare east of the Rocky Mountains. But during the late 1800s, each successive winter found them a little further east. By 1910 they had reached Rhode Island. For many years evening grosbeaks enjoyed prosperity in the east. However, over the last 50 years evening grosbeak numbers have declined. Scientists have documented a 97% decline in eastern populations but can only speculate on the cause.

I have often wondered why my success in seeing evening grosbeaks has been so sporadic. It turns out that it isn’t just me. These birds are gregarious, often moving in large flocks. So, seeing them is a sort of feast or famine. You may see a large group or nothing at all.

Finally, they are notorious for their wandering habit. They may visit a bird feeder one winter and then not again for several years. Evening grosbeaks may spend all year in Eastern Idaho, never really migrating, but in the eastern states, they are considered irruptive, showing up in great numbers some years and are scarce in others.

I look forward to each and every encounter I have with the pretty evening grosbeak. I won’t hold my breath waiting for the next time though.