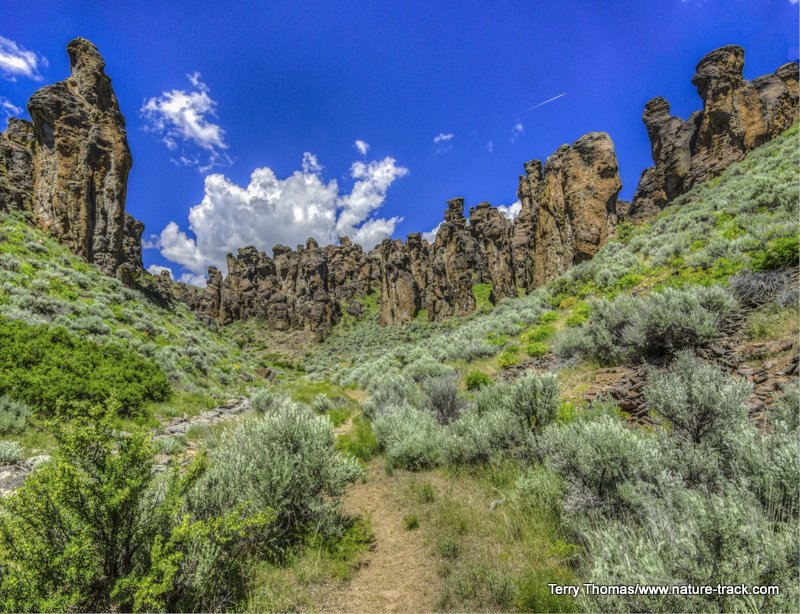 Little City of Rocks is a great place to visit, especially early in the season when plants are still green. Watch out for ticks though!

We drive a lot, perhaps too much some might say, in our quest to find new places to explore. Over the years we have seen places in Idaho and surrounding states that most others have never heard of. Recently, we took a drive from Hill City, west of Fairfield, over the Bennett Mountain Road and into the Bennett Hills. It was awesome expansive country completely new to us despite the fact that we have driven past it on Highway 26 on the north and I-84 on the south for years.

After we left the Bennett Hills and grabbed some gas at Bliss, we jumped on the freeway and headed to Gooding to find one more area. At Gooding we turned north onto Highway 46. After about 13.3 miles, we saw the sign we had been looking for, Little City of Rocks. We turned left on a dirt road, stayed right at the fork and in about 1.2 miles parked at the base of an old rock dam.

Despite having lived in Idaho for 35 years, I had heard of Little City of Rocks only three years ago and it had taken this long to get there. We didn’t know for sure what to expect, but I had been told that it rivaled the nationally recognized City of Rocks near Almo, Idaho. I have been to City of Rocks and found it amazing, so I had high hopes.

It was past noon when we put boots to trail so I didn’t intend to go far—just a few hundred yards to see around the next corner. I had my tripod and camera over my shoulder and that was it. No water, nothing. The first bend yielded an intriguing view of a narrowing canyon lined with dark volcanic rock spires, often called hoodoos, arches and windows. As we walked, we could look up into dark canyon branches and I thought that the Google Earth view of the canyon must resemble a tree.

While the vegetation on the canyon walls was typical of the hot and dry area north of the Magic Valley, the bottom of the canyon was very different. Along the trail it was green and lush, with a few wildflowers still in bloom. Chokecherry and hawthorn shrubs, a few willows and other plants were more reminiscent of a riparian or mountain shrub community with the wildlife, such as Bullock’s orioles, to match.

The scenery was so intriguing that we covered two miles without even really noticing it. The birding was good with hawks and golden eagles circling above, pigeons cooing from the rock ledges and a myriad of songbirds in the canyon bottom. I even showed my wife her first ever mourning dove nest, complete with two white eggs, under a bush. With just three-quarters of a mile to go before topping the head of the canyon, we stopped where rain water still sat in pools in the shady creek bottom.

When we finally got back to the truck, we were hot and thirsty, but well satisfied that we had begun the exploration of an awesome place. I could see us camping there, perhaps even backpacking up a mile, and spending several days hiking the side canyons.