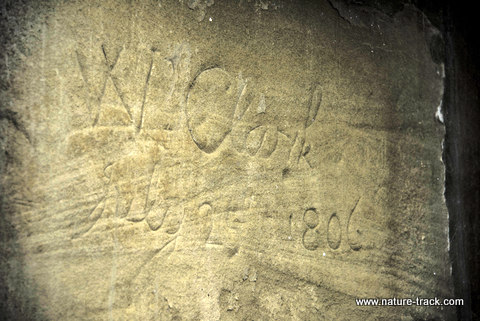 William Clark’s signature on Pompey’s Pillar, Montana, is a priceless piece of history and one that should evoke the explorer in us all.

Pompey’s Pillar National Monument, 25 miles east of Billings, Montana contains the only remaining physical evidence of the passing of members of the Lewis and Clark Corps of Discovery expedition of 1804-1806. I was staring at that evidence, trying to imagine the 211-year-old scene. William Clark, co-leader of the expedition, standing upon a rock and carving his name and the date, July 25, 1806, into the soft rock among Native American carvings up to thousands of years old. The future and the past colliding in rock art.

I could hardly believe that I was actually looking at Clark’s name, carved by his own hand. His journal entry for that date reveals: “The nativs have ingraved on the face of this rock the figures of animals Ec. near which I marked my name and the day of the month and the year.”

Beyond his signature, I could witness little of what he saw. I walked a boardwalk to the top, following the boot prints of thousands before me. Clark followed no trail and only moccasins had preceded him.

Most of the petroglyphs he referred to have been savaged by time and humanity. It is still wide-open country, with the “extensive view in every direction” that Clark mentioned, but where he had to wait for bison to cross the river for several hours, the Bundy highway bridge now stands. Cattle have replaced the bison and elk, and wolves are verboten on the entire landscape. Unending prairie grass has been plowed and replaced with the even lines of irrigated fields full of alfalfa and grains.

In an interesting twist, in this area, large cottonwoods now line the river. In Clark’s day, they had a difficult time finding trees large enough for dugout canoes because the elk and the bison continually pruned the trees down.

Only the squadrons of mosquitoes seemed the same, although they were likely far worse in Clark’s day. He remarked that at the confluence of the Yellowstone with the Missouri River, he could not fire at a bison because the mosquitoes obscured his rifle sights.

From their writings, it seems Lewis and Clark were acutely aware of their role in history. I tried to imagine what Clark must have been thinking as he surveyed the vastness around him, and except for the petroglyphs, empty of any hint of humanity. The purpose of their expedition was to find a way to open this country to settlement and he may have envisioned it just as I was seeing it today, but I doubt he could imagine that the bison, elk and wolves could nearly be exterminated.

Pompey’s Pillar became a national landmark in 1965 honoring William Clark who often resides in the shadow of Meriwether Lewis. In 1995, the BLM purchased 51 acres from a private individual and in 2001 it became a national monument, one of the smallest in the entire system.

I have seen a fair number of this nation’s historical sites from Gettysburg to George Washington’s Mount Vernon. But nothing has moved me as much as standing in the same place that Clark stood, feeling the same blustery wind, and looking over the vastness of the American West—it was humbling and inspiring. And in seeing the simple inscription, Wm. Clark July 25 1806, the history of this expedition came vividly alive for a moment.