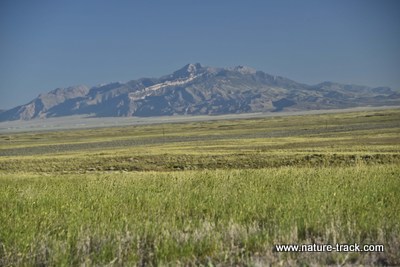 Exotic grasses dominate this former sagebrush habitat near Arco, Idaho. This is a common sight in sagebrush country, a result of wildfire or intentionally removing sagebrush to “improve” the range.

At one time, sagebrush habitat covered as much as 300 million acres (over 468,000 square miles) in the Western United States. It provided a robust ecosystem for over 350 species of wildlife. Today, that vast sea of sagebrush has shrunk into a series of lakes, ponds and puddles and is considered to be one of the most imperiled ecosystems in the nation.

There may still be the visual appearance of plenty of sagebrush, but as Mary Rowland, researcher for the Forest Service’ Pacific Northwest Research Station says, “Even though you can see sagebrush everywhere, less than 10 percent of the remaining habitat is unspoiled, in terms of historical structure and composition.” That is like a ten cylinder truck with only one functioning cylinder. It still looks like a truck but it doesn’t run like one.

The assault on sagebrush habitat hasn’t ended. Most of the conversion to agriculture has finally subsided but only to be replaced with energy driven activities such as gas, oil and coal extraction. Wildfires continue to erase sagebrush habitat each summer and noxious weeds supplant even more. A recent report indicated that ten million acres (15,625 square miles or four and one half times the size of Yellowstone National Park) in the Great Basin alone are at moderate to high risk of displacement by cheatgrass in the near future. At this point in the game, that is a permanent change.

Not all sagebrush is created equal. There are at least 18 species and subspecies, each with its unique properties, growth forms, preferred habitats and preferences by sage-grouse, pygmy rabbits, pronghorn and mule deer, iconic species of western rangelands.

Not only is all sagebrush not created equally, it cannot be managed equally either. The most common form of sagebrush is big sagebrush, a species further divided into Basin, Wyoming and Mountain big sagebrush subspecies. Each one has a different associated community of grasses, forbs and other shrubs, and responds differently to grazing, noxious weed invasion and especially fire.

A management strategy to maintain sagebrush that works well in the mountain big sagebrush community of the Sand Creek Desert or in Shotgun Valley, may be the exact wrong strategy in the nearby Big Desert, dominated by Wyoming big sagebrush. Big sagebrush of all types is killed by fire and may take from 20 to 100 years or more to recover, depending on the subspecies.

The assertion that all sagebrush naturally creates a monoculture and must be controlled isn’t true. A 25 year study on the INL removed grazing and found that sagebrush density increased in the first years and then stabilized as grasses prospered.

Conserving sagebrush ecosystems is not an easy task. But with 350 wildlife species at risk, it should be our priority. “There is an ecologically driven urgency to start now,” says Michael Wisdom, a researcher with Rowland. “This ecosystem is so vulnerable to threshold effects that, once crossed, are nearly impossible to reverse. It is far easier to prevent the system from reaching thresholds than it is to mitigate them after the fact.”