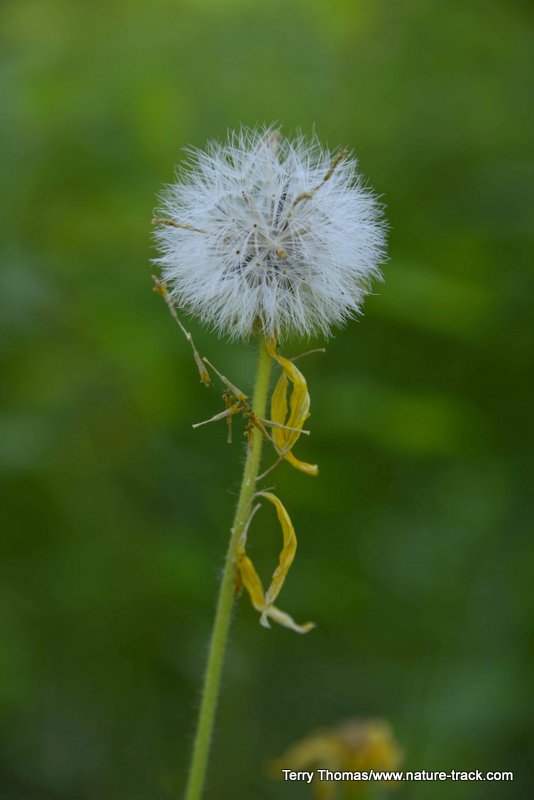 The seedhead of this heartleaf arnica doesn’t look much like the flower did. Knowing what to look for is an important part of seed harvesting.

Sitting at my desk, chair swiveled around toward the window, I watched as a salsify seed floated up and past the window. Where it would land would be anyone’s guess. With the slight breeze and warming temperatures creating thermals, it could travel hundreds of yards or even further before coming back to ground and attempting to grow.

That seed’s future will be ruled by the vagaries of nature. If it lands on good soil, it could flourish and become a biological success. If it sticks to someone’s roof, it is game over. Occasionally, I like to interrupt the randomness of this system and collect and plant native seed myself.

Why would I want to collect wildflower seed? A lot of seed is available commercially. I recently purchased eight different species from Grimm Growers in Blackfoot, ID. They will sell wildflower seed by the ounce and compared to the tiny bags of seed you can buy at the big box stores, it is a good value, even at $10-15 per ounce. An ounce is a lot of seed. However, there are only a relative few species available that are truly native to our area. If you want to be sure your seed is from plants growing locally, you must collect the seed yourself.

Collecting wildflower seed can be challenging. The biggest drawback is that by the time the seed is ripe and ready for harvest, the plant may not look like what it did when the flowers were in bloom. I can think of a number of species where this is true: glacier lilies, camas, mountain dandelion and bitterroot to name a few. Some tend to look like others in their genus or family making it difficult if you want a specific species. You may need to look carefully or scout during the flowering season to be sure.

How the seeds disperse can make collecting more of a timing issue. Seed that is windborne doesn’t wait around once it is ripe. The first breeze that tickles the ripe seed will begin to carry it aloft and within a day or two, much of the seed can be gone.

Other plants, geranium comes to mind, actually flings its seed away from the mother plant as the seed pod dries. In order to capture this seed, you might have to tie netting around the developing seedhead and wait for it to burst. The netting will capture the seed.

While seed collecting is no different than berry picking and is allowed for private use on federal and Idaho Department of Lands properties, there are a few things to consider. First, I never harvest from a plant if it is the only one in vicinity. I prefer to harvest from large expanses and then I sample from a variety of areas within it to improve the genetic mix. Second, be sure of what you are harvesting. It would be unfortunate to harvest and plant a bunch of seed only to discover that you planted spotted knapweed or toadflax, both weeds on the state noxious weed list.

Most of this seed benefits from overwintering in the ground so a fall planting after your harvest would be perfect.  Just broadcast the seed over the desired area, rake it in and let nature do the rest.

If you want a true wildflower garden, I know of no better way than to gather your own seed and plant it.