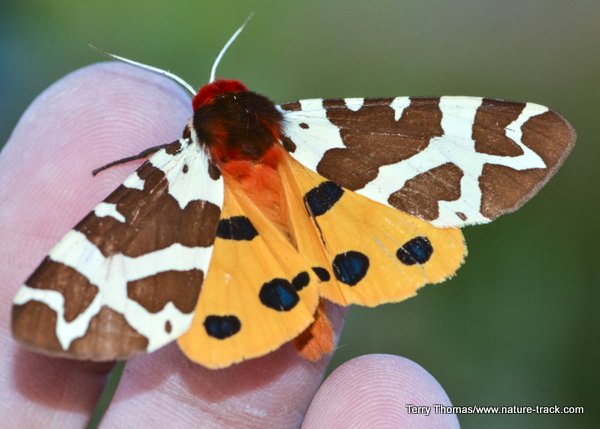 Not all moths are blandly colored as this Garden Tiger Moth shows.

I was looking at the photo accompanying this column when my granddaughter, Olivia, came in to say goodnight. “That’s a pretty picture!” she exclaimed. “That looks like a butterfly, it is so pretty. Moths are usually gray or brown. But that is a moth because it rests with its wings open and has funny looking antennae.” Spot on, I told her. For six years old, she is way too knowledgeable. These days, before I pontificate to my grandkids about a nature subject, I am wise to find out what they already know.

This highly successful order has been around for perhaps 190 million years. In that time, they have colonized every continent except Antarctica. Species thrive as high as 20,000 feet above sea level, in Arctic environments, deserts, jungles, plains, forests and every other known habitat.

The first rule is that the antennae of a butterfly are thin and form a “club” at the end. The terminal end may look like a ball, a sausage or something else, but it is always wider than the stem. This is almost always true. Skippers lack the ball and the tips of their antennae “hook” to the outside. Moths don’t have clubs, but often have long straight antennae or feathered antennae.

Second, as Olivia also pointed out, butterflies are usually colorful while moths are generally bland or cryptically colored. As the photo shows, this is certainly not a hard and fast rule. There are many stunningly beautiful moths.

Third, butterflies usually rest with their wings together, like hands clasped in prayer. Moths typically rest with wings open (many species have wings that fold on top of the back). However, butterflies will commonly alternate between the two poses when sunning themselves so this isn’t a solid rule either.

Fourth, moths are typically nighttime feeders. That is why, if you want to see moths, you hang out a bed sheet at night and put a light source behind it. It will attract moths from long distances. Butterflies are daytime feeders, preferring sunlight. However, there are many day-flying moths. A few years ago, I found a patch of late-summer blooming musk thistle and it was bustling with sphinx moths in the middle of the day.

Fifth, the overall look of a moth is often different from that of a butterfly. Moths appear chunkier and seem to be covered in fur. This is quite evident in the photograph. Skippers look similar to moths in this respect. Butterflies are usually sleek and hairless.

Finally, and this is likely the surest, but most difficult, way to tell butterflies from moths—most moths have a frenulum, a modified structure that links the front and hind wings together to ensure that they move together. Butterflies don’t have this, but it is hard to see, requiring a specimen in-hand.

Telling butterflies, skippers and moths apart is often a subjective call. I look first at the antennae and at the overall appearance, then if needed, look at the other clues. Moths are so variable though that the greatest challenge often isn’t trying to tell them from butterflies, but rather, whether or not they are moths at all or some other insect.