The Diversity of Aquariums 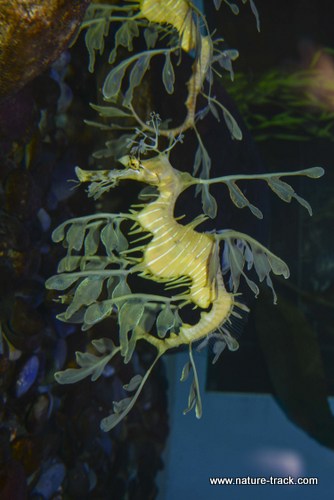 This leafy sea dragon, a fish related to seahorses, is but one example of the amazing wildlife that exists but is hidden in the waters of this world. Aquariums give us a window to these marvels.


Collectively, the oceans, lakes, rivers, streams and wetlands of this planet can make most terrestrial habitats seem almost barren. Each has its own unique properties resulting in flora and fauna often exclusive to its waters. The Amazon River is a very different river from the Congo or the Mississippi or the Snake; the Pacific Ocean is different from the Indian, Arctic or Atlantic Oceans. Coastal waters differ from open oceans, and fresh water from sea water or the brackish mix where the two intertwine. Water depth, current, water clarity and chemistry all help to form unique habitats.

The variety of animal and plant life found in these complex three dimensional habitats is astounding. The waters of our world hide most of their treasures though and we are seldom able to appreciate them.

And that is why aquariums, windows to this world, are one of my favorite places to visit. Most recently, my wife and I took in the Seattle Aquarium. Most aquariums have dazzling displays. Two story tall million gallon tanks complete with wet-suited divers feeding the sharks and walk-through glass tunnels where you are surrounded by sea-life are common attractions. Sting-rays, those long-tailed and flat-bodied fish, are also found in most aquariums. As in the Seattle Aquarium, there is often a “petting” area where children can safely touch stingrays, hold starfish and enjoy other commonly found sea life.

However, it isn’t the glitz and showmanship that attracts me to aquariums. It is the diversity on display. While I can visit a forest or desert and appreciate its plant and animal life, aquariums are about the only way to really see what is under the rolling waves of the ocean or the muddy waters of the Amazon. And that diversity is astounding.

Aquariums are as different as the species within them. I have been to aquariums in the following places: Albuquerque, New Mexico, Seattle, Washington, Omaha, Nebraska, Salt Lake City, Utah, Chattanooga, Tennessee, Gatlinburg, Tennessee, The National Zoo in Washington, DC, Atlanta, Georgia and San Diego, California. What I can tell you from my experience is that the species and habitats represented in each aquarium are as different as sand and water.

Each aquarium tends to specialize on a group of habitats, usually close to home. For instance, the Tennessee Aquarium in Chattanooga, a huge two building affair arguably considered the best aquarium in America, specializes in freshwater habitats, especially rivers.  Despite a degree in fisheries, I was blown away by what I didn’t know about freshwater fish.

The Seattle Aquarium is dedicated to habitats that are found along the Washington coastline, including bays, estuaries, freshwater rivers and open ocean. It was full of intriguing vertebrate and invertebrate species I have never seen before.

Although aquariums are mainly about the flora and fauna that live in the water, they also recognize the wildlife that make their living from the waters of the world. Most aquariums also display animals such as sea lions, otters, beaver, alligators, penguins, puffins, turtles and more.

Aquariums give us a peek at a world we might otherwise never realize even exists. Even then, I suspect if I could visit every aquarium in the world, a worthy goal, I would find that the water world is so diverse that it might actually be impossible to ever become repetitive. I think I will visit a few dozen more to test my theory. I’d like to start with one in Africa or perhaps Australia.