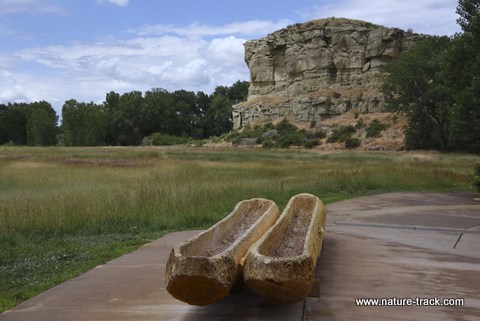 JULY 3, 1806, TRAVELER’S REST, PRESENT-DAY LOLO, MONTANA.  Meriwether Lewis and William Clark wished each other well as the Corps of Discovery split into two parties at Traveler’s Rest, a camp that they had used on their journey west the previous year. This was the return trip for the explorers and though tired, they wanted to document and map as much of this new territory as possible. Lewis was to follow the Blackfoot River to the Great Falls of the Missouri while Clark would take his crew and follow the Yellowstone River to its confluence with the Missouri where the Corps would reunite.

Although Lewis was the official Captain and leader of the Corps, he insisted that Clark, his second in command, be treated in every way his equal and they had no problem dividing the group for an extended time. All the men were well seasoned frontiersmen by this time, having spent over two years afield and they were confident in their abilities, even when their numbers were halved.

Three days later, Clark’s group crossed the Continental Divide at Gibbon’s Pass, east of present-day Sula, Montana. They were headed for Three Forks, where the Jefferson, Madison and Gallatin Rivers formed the headwaters of the Missouri River. First though, they made a much-anticipated stop at a location where they had cached supplies on August 20, 1805. Principle among these supplies was chewing tobacco, more prized by Clark’s men than gunpowder. This site, known as Camp Fortunate, is now buried beneath the waters of Clark Canyon Reservoir, just north of present-day Dell, Montana.

It was near this location on August 17, 1805, that Sacajawea, the Corps’ Native American interpreter and goodwill ambassador, joyously encountered her brother and the people of her tribe, from whom she had been kidnapped as a child.

From Three Forks, they moved eastward toward present-day Livingston, Montana where they encountered the Yellowstone River, due north of what would become Yellowstone National Park, the world’s first national park, just 66 years later.

From there, the trip was routine and hardly noteworthy until July 25th, 1806. On that date, about 25 miles east of present-day Billings, Montana, they came to a tall petroglyph-tattooed sandstone pillar.

Clark’s diary reads: “... At 4PM [I] arrived at the remarkable rock situated in an extensive bottom. This rock I ascended and from its top had a most extensive view in every direction...after satisfying myself sufficiently in this delightful prospect of the extensive country around, and the emence herds of Buffalow, Elk and wolves in which it abounded, I decended and proceeded on.”

Clark’s diary continues, “This rock which I shall call Pompy's Tower [named for Sacajawea’s two-year-old son whom Clark affectionately nicknamed Pompy, meaning Little Chief, in Shoshone] is 200 feet high and 400 paces in secumpherance and only axcessible on one side which is from the N.E. the other parts of it being a perpendicular clift of lightish coloured gritty rock.” (in 1814 the name was changed to Pompey’s Pillar).

The site was admirable in part because of a geologic formation on the north side of the river. There, a high steep bluff, nearly 80 miles long, parallels the river. Across from Pompey’s Pillar, was a quarter-mile-wide gap in this otherwise challenging wildlife barrier. Bison, elk, pronghorn and more all poured through the gap and crossed the river.

I can only conclude that after all he had seen and experienced on an expedition that covered about 7,000 miles, for Clark to make such entries into his journal, this indeed must have been an extraordinary place.