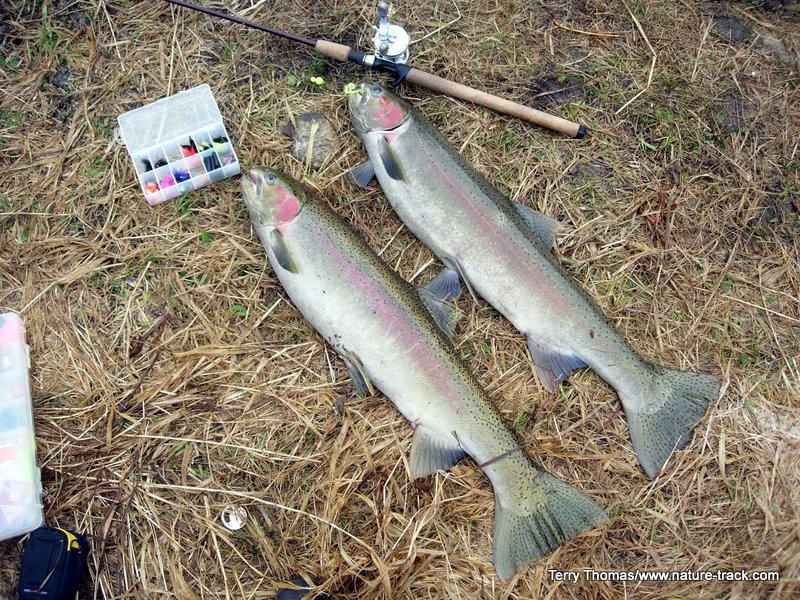 Steelhead trout are one of several species of trout native to Idaho.

It was a taste-off, kokanee salmon against rainbow trout cooked several different ways. I wasn’t optimistic about the chances hatchery raised rainbow trout stood against salmon, but, judging by their size, these rainbows had been in Island Park Reservoir for several years so I was reasonably okay with the fairness issue.

Unsurprisingly, the salmon won by a wide margin. But everyone agreed that the trout were surprisingly good, both on the grill and baked in foil, making me anxious to catch more and try them in my smoker.

Trout are a premier fish in Idaho. Not only are they sought after as table fare, they also provide sport for tens of thousands of anglers and sustenance for a variety of wildlife including bears, eagles, osprey, kingfishers and mink.

Trout is a general name that covers three different genera within the salmon family: Salmo (Atlantic species), which includes the famous brown trout, Oncorhynchus (Pacific species), the genus for rainbow (and the anadromous steelhead which is a sea-run rainbow) and cutthroat trout, and Salvelinus, the genus for brook trout, bull trout and lake trout. There are also a few notable hybrids such as the famous and naturally producing cutbow (cutthroat x rainbow), the speckled trout or splake (brook x lake trout) and the tiger trout (brown x brook).

Within these three genera are a wide variety of subspecies such as golden trout and the giant Lahontan cutthroat. However, within Idaho, the Yellowstone cutthroat, the Snake River fine-spotted cutthroat (sometimes considered a separate subspecies and sometimes considered a variety of the Yellowstone cutthroat depending on the source), Bear Lake cutthroat, bull trout and the steelhead are native. Brown trout originate from Europe and Western Asia. Brook trout and associates are from the eastern US and Canada and rainbow trout are from the Pacific coastal states. All have been introduced into Idaho.

All trout have several features that make them trout. First, their shape is long and slender. Their fins have no sharp and bony rays like catfish or the sunfishes, and all have an adipose fin, a small fleshy fin without rays that aids in streamlining the fish in fast-moving water. They have fine scales and a total of eight fins.

Another major limiting factor for trout in streams and rivers is silt. Silt is considered the number one pollutant in many trout waters. Silt is usually the result of bank destabilization (removal of vegetation that also shades and cools the water) and poorly maintained watersheds. Silt plugs gills and also covers reds (nests in gravel) and suffocates eggs.

Trout are relatively easy to raise in hatcheries. Idaho Department of Fish and Game raises and releases over 30 million fish each year across the state. Although 18 species are stocked, the vast majority are rainbow trout (and kokanee salmon) and are stocked in sizes ranging from fry and fingerlings to catchable-sized fish.

Rainbow trout also make up the bulk of the aquaculture (farm-raised) industry. Idaho’s fish farms supply 75 percent of over 50 million pounds of rainbow trout produced annually in the United States.

If I could choose, brook trout grilled over charcoal would be my first choice for table fare. Other trout are tasty though and like many meals, it is the memory of the catch that matters most.