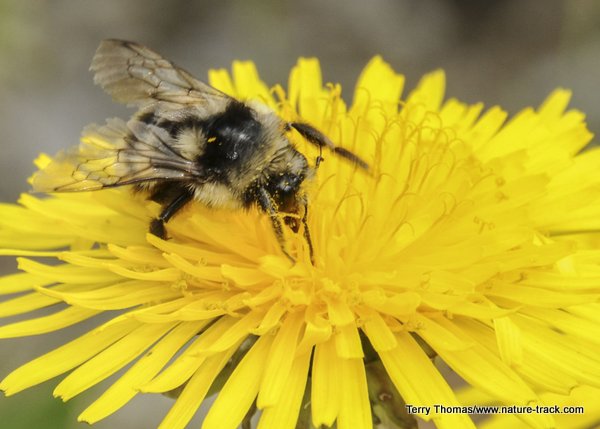 Native bees are essential for the pollination of a wide variety of plants that we depend on. We should help them out all we can.

Summer is in full swing and garden flowers and wildflowers are alive with colorful blossoms. The air is filled with the scent of flowers and is literally buzzing with activity. The buzzing comes from a wide spectrum of insects that appreciate the nectar and pollen flowers produce, but arguably, the most important of these may be the 4,000 species of bees native to this continent.

Right away, I should differentiate between native bees and honey bees. Honey bees are not native. Colonists brought honey bees to our shores in the 1620’s as a source of wax and sugar. These are the bees cultivated by beekeepers and used widely to pollinate crops. There are so many honey bees in the world that they are considered the world’s most abundant livestock. Despite a recent trend in home-based beekeeping fueled by the assumption that this is helping nature, maintaining honey bees does nothing to promote native bees. It is like keeping a dog to support wild canines.  Beekeeping  can even be detrimental to native bees as honey bees are strong competitors for resources.

Native bees evolved from wasps (and specialized wasps called hornets) but differ in several ways. First, bees feed exclusively on nectar and pollen whereas wasps are generally carnivorous. Bees are usually covered in setae, or “hairs”, while wasps generally have shiny bodies with little hair. Bees often have a pollen sac on hind legs and wasps do not. Wasps also have a narrow “waist” between abdomen and thorax where with bees this is not as noticeable.

Native bees are surprisingly variable. The common black and yellow pattern is just one of many colors for native bees. They may be black, metallic blue or green, red or a mix of colors and patterns. Among our 4,000 species (20,000 species worldwide), they range in size from giant bumble bees to the two millimeter-long (about 1/16th inch) Perdita minima bee.

Other than bumble bees, the majority of native bees do not form hives or colonies nor do they make honey. Most bees are solitary, building nests in the ground, rotting logs or hollow stems of plants. Each female is fertile and there is no “queen”.  In these chambers the bee lays eggs and provides a food supply of pollen and nectar for when the eggs hatch. She does not care for the egg or the larva. This may seem harsh, but the fact is, most adult bees live only a month or two and just aren’t around for tending duties.

We should care about native bees for a very selfish reason. According to the National Wildlife Federation, “bees pollinate a staggering 80 percent of all flowering plants, including approximately 75 percent of the fruits, nuts, and vegetables grown in the United States.”

Native bee conservation should be on everyone’s radar, especially since their numbers are declining dramatically. Habitat loss and fragmentation, pesticides, disease and climate change are all taking a toll. We can help by planting lots of native flowers and by establishing bee nesting boards, sometimes called, bee hotels (see the following website for ideas: https://www.beyondpesticides.org/programs/bee-protective-pollinators-and-pesticides/pollinator-curriculum/build-your-own-native-bee-house).