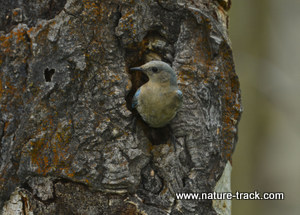 A female mountain bluebird emerges from her nest in a dead aspen snag. In Idaho, 50 species of wildlife use snags for foraging, roosting, nesting and denning.

A female mountain bluebird tugged at something about 20 feet away. I thought she might have captured a worm and brought up the binoculars for a closer look. She didn’t have a worm; instead she was ripping up pieces of bark from an aspen log. When she was satisfied with her effort, she darted off with a bill full of bark shards. I watched her land on a nearby dead standing aspen, then she disappeared. It was as if the tree had swallowed her up. Which it did—sort of. She had disappeared into a hole in the trunk where she and her mate were constructing a nest.

This aspen tree, long dead and broken off about half way up, wasn’t much to look at. Old bark, dry and brittle, flaked away from the trunk in large chunks. Perhaps a branch had once protruded from the cavity the bluebird was appropriating for a nest but there were no branches now. Another hole, further up the tree, had clearly been excavated, likely by a woodpecker chasing a meal. Indeed, it was a sad looking specimen.

Looks can be deceiving though. This dead standing tree, called a snag, and others like it, is high value wildlife habitat, far more beneficial than simply another tree in the big woods. A dead or dying tree is a beautiful thing to wildlife.

In Idaho, about 50 species of wildlife use snags. Bats roost underneath the loose bark. With a customary hammering, yellowbellied sapsuckers, flickers, Lewis, black-backed and pileated woodpeckers and more carve out hollows as they search for insects that are having their way with the dead tree. Bluebirds, wood ducks, wrens, chickadees, great gray, sawhet, elf and flammulated owls, kestrels and finches all find cozy nesting accommodations when the woodpeckers are through. Besides bats, seventeen other species of mammals, up to and including the black bear if the snag is large enough, have been documented denning in snags. The wide variety of wildlife benefits makes it is easy to understand why a program of installing nesting boxes, while valuable, cannot replace snags.

A healthy forest will have many snags of different sizes, from a variety species and with a range of stages of decomposition. This is one reason why a forest that is managed for multiple benefits, one of which is wildlife, cannot be managed in a monoculture of even-aged trees. That is a plantation, not a forest.

Generally, the larger the snag, the more valuable it is to wildlife. Larger snags attract and accommodate multiple species.  Big snags can only come from forests where trees are allowed to grow to maturity and die. This isn’t wasteful, it is thoughtful planning for wildlife.

One day, that beautiful snag will tumble to the ground. There, as it makes the final transition to soil, it will provide habitat for salamanders and invertebrates. Bears will tear away at it looking for treasures of grubs. Small mammals may den inside the cavities carved by woodpeckers and occupied by bluebirds. Seeds from nearby plants will take root in its decaying wood, generating the next cycle of forest. And somewhere nearby, another tree will die, becoming the next wildlife resort.