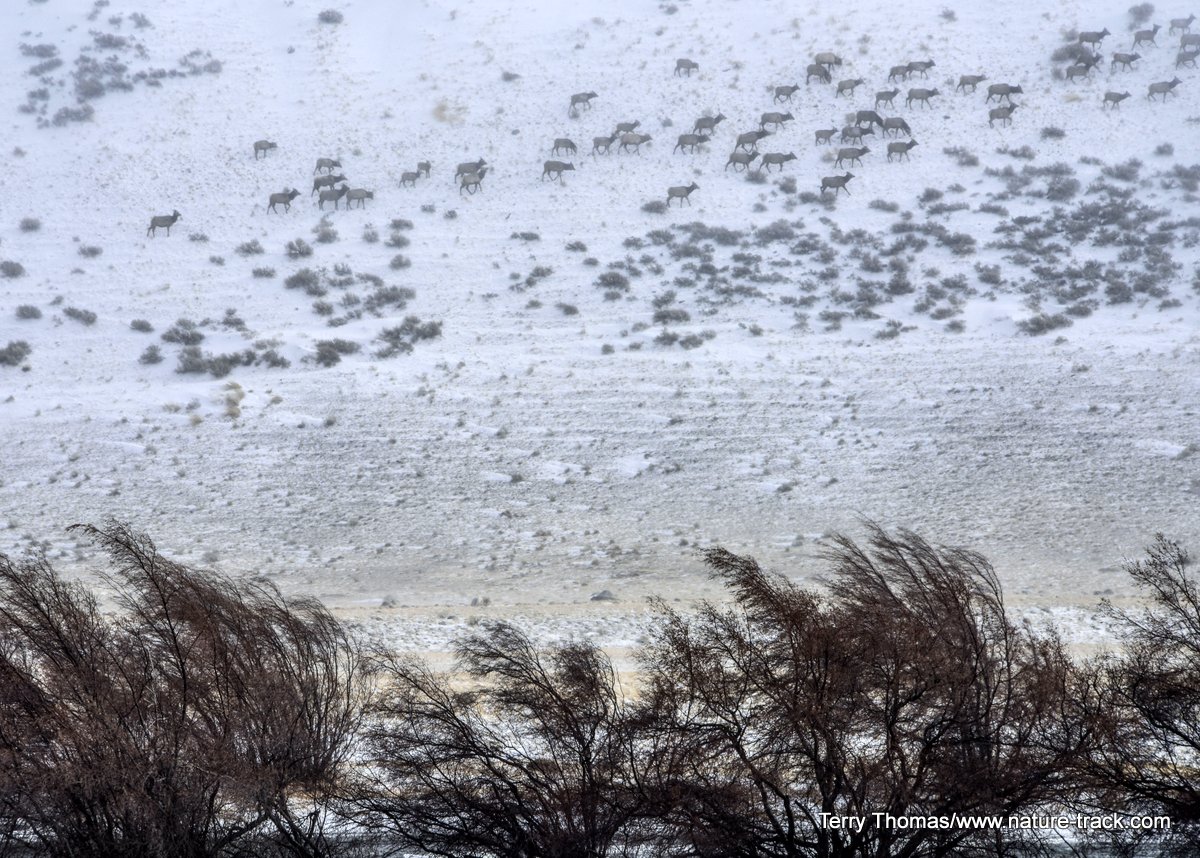 Wind can significantly increase the impact of cold temperatures so these elk sought shelter on the lee side of the wind whipping off the Madison Range near Ennis, Montana on January 1st, 2022.

On January 1st, temperatures in Island Park dropped as low as -15 degrees Fahrenheit. That is bitter cold, I don’t care who you are. Even worse, for a 24-hour period, the effective temperature was expected to be as cold as -45 degrees F., cold enough to be deadly because of steady winds.

This phenomenon of having our world actually colder than what the thermometer says is called the wind chill factor. It takes into consideration not just the ambient temperature but how quickly wind can steal heat from our bodies.

Wind chill calculations had their origin in Antarctica during the 1940s. Researchers, apparently bored with their assigned tasks, decided to determine how wind affected the freezing of water bottles. It was long known that wind could shorten freezing time by removing the warm air surrounding objects and they set out to quantify this. After some crude experiments, they developed a rough chart that they dubbed, the wind chill factor. Other scientists found this useful, but average folks couldn’t apply it. Then, in the 1960s, military researchers changed how we think of wind. They tied ambient temperature and wind chill together by giving a new temperature that accounted for the effects of the wind.

The concept of wind chill took off from this point and within a decade was a standard in weather reporting. It was a very specific measurement of how quickly frostbite might occur. For instance, if the ambient temperature was 28 degrees F. and the wind chill factor corrected the temperature to 22 degrees F., you would develop frostbite as quickly as you would at 22 degrees F. and no wind. More specifically, this was for bare facial skin in a consistent head wind—very precise and very narrow in application, but broadly interpreted.

The formula was revised with more testing in 2001, this time on real human subjects and with sophisticated heat loss models for the human body, not water bottles, but even then, the sample size was small. This is the current system in use today and only applies when temperatures are below 50 degrees F. and wind exceeds three miles per hour. It is much less sensitive to the effects of wind than the previous model, but even the researchers who developed it believe it to be, “an imperfect gauge to what it feels like to be outside”.

The National Weather Service continues to promote wind chill precisely because it is a “worst case” scenario and tends to get people to take the possibility of frostbite seriously. However, many climate specialists believe that the wind chill factor should be scrapped as there are better models that measure “feels like” temperatures. These models take into consideration other climatic factors, most notably, humidity and solar radiation, which can dramatically influence perceived temperature even without wind. One of these is called the Universal Thermal Climate Index (UTCI). Several weather channels have also developed their own proprietary “feels like” metrics. However, humans are very different from individual to individual and what feels cold to me may be different to you, making even these “better” models less than perfect.

Near Ennis, Montana on January 2nd, the wind was whipping at about 20 mph, blowing enough snow across the road to obscure oncoming traffic. The outside temperature was 15 degrees F. Combined, the temperature, adjusted for wind chill was -2 degrees F., dang cold, dang blustery, and dang unpleasant. Was it -2 degrees F. on my face? I don’t know, but I do know that it was far colder than it was when we returned home to 10 degrees F. with no wind. I think I will look more closely at the “feels like” indices in the future, but since I essentially grew up with the wind chill index, it still makes some sense to me.