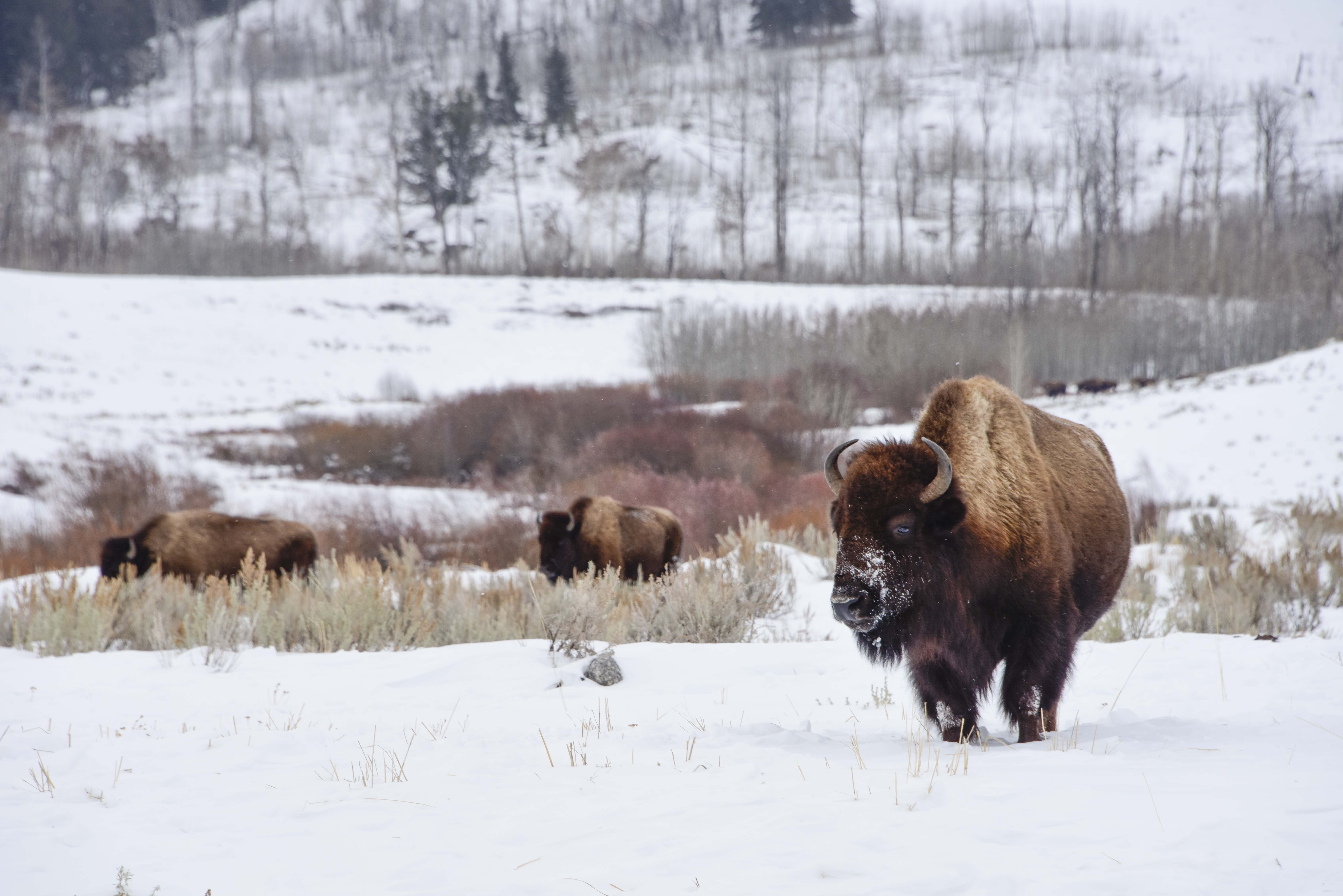 Bison were easy to find along the road from Gardiner to Cooke City, Montana in the winter.

Getting into Yellowstone National Park after the roads closed on November 3rd has been problematic. Over the snow tours have started, but unless you are willing to shell out some serious cash to take all your family in a snow coach or rent snowmobiles for everyone, walking or skiing is pretty much your only option. Unless, of course, you are willing to drive a bit.

The highway from Gardiner to Cooke City, along the Yellowstone River then through Lamar Valley, is kept open year-long. It is a bit of a drive from Idaho Falls though and so you will have to plan to spend the night in either Gardiner or Cooke City.

So, what exactly, is a bit of a drive? From Idaho Falls, you drive to Bozeman, Montana, then east to Livingston. This is about a four-and-a-half-hour drive. From Livingston, Gardiner is another 59 miles, or about one and a quarter hours. From there into Lamar and on to Cooke City, it is as long as you want to make it.

We made this trek last week and found a different Yellowstone waiting for us. Mainly the expected crowds just weren’t there. There were vehicles on the road, that is for sure, but once past the bridge over the Gardiner River, we only saw perhaps 20 vehicles per hour. The road was icy in places and we went slow looking for wildlife, and pullouts were numerous and mostly empty.

And we found plenty to look at. In all, the only hoofed mammals we did not see were the mountain goats on Baronette Peak (low clouds prevented us even seeing the mountain), white-tailed deer and pronghorn. Otherwise we saw moose, elk, bison, bighorn sheep and even one mule deer. In addition, we saw coyotes several times and an ermine, but wolves eluded us. Honestly, it was a relief to not have to strain our eyes searching for grizzlies and black bears for a change.

One thing I did not know is that there are a number of cross-country ski trails in this area of the Park. The ranger suggested that the trails are groomed and signs confirmed that. I remember trails at Tower Junction, Baronette Peak, Blacktail Deer Creek and Upper Terrace at Mammoth but I know there were more.

Elk were easiest to find around Mammoth, but we did finally find a small herd at the Tower Junction area above the Roosevelt Lodge and two huge bulls at the entrance to Lamar Valley. Bison were numerous and simple to find. They were scattered from about Phantom Lake through Lamar Valley to Pebble Creek. We saw moose at Soda Butte and bighorns, including a large ram, at the Yellowstone Picnic Area, which is just atop the hill after crossing the Yellowstone River bridge east of Tower Junction on Highway 212 (to Cooke City).

We opted to stay in Gardiner as the Super 8 there was very reasonable compared to places in Cooke City. Also, Cooke City is about 15 miles past Pebble Creek at the far end of Lamar Valley and wasn’t as central as I thought it would be. The Super 8 was a great place to stay ($70 after taxes) with clean remodeled rooms and a large breakfast including ham and scrambled eggs and biscuits and gravy.

Despite poor weather, we really enjoyed our adventure into Yellowstone in winter. We are looking forward to doing it again.