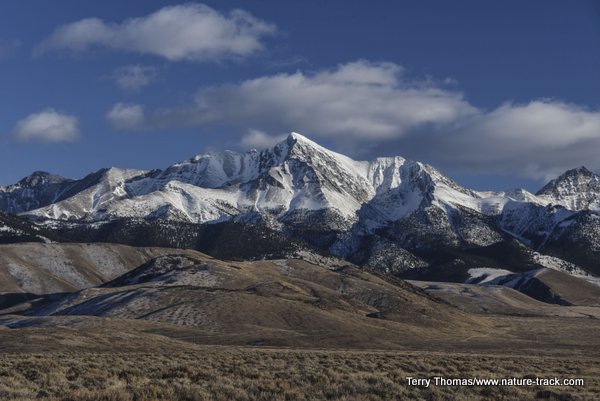 Mount Borah sits high on the Lost River Range, one of many Basin and Range systems in central and southern Idaho.

There is nothing harder for me to grasp than geologic time. I see our world as it is and, for the most part, cannot visualize processes that occurred millions of years ago on a grand scale. Many of these processes still happen today but our lives are too short to be able to really witness them in motion.

That wasn’t the case on October 28, 1983. Just after breakfast, the Lost River mountain range demonstrated how it came to house Idaho’s highest peak. A fault line slipped and the mountain range drove upward a foot while the valley dropped four feet. Much of the West felt the accompanying 7.3 magnitude earthquake.

A fault scarp several miles long was still visible from Highway 93 when my son and I drove past Mt. Borah last week. It joins another six-foot fault scarp in the same area that geologists estimate to be 10,000 years old. Only 1,500 such events over five million years would be needed to explain the spatial difference between the top of Mount Borah and the rock buried by sediments in the valley bottom.

The Lost River range and its associated valley are part of a great area of similarly formed mountains called the Basin and Range Region. Beginning in the southeast corner of Oregon, it encompasses everything from the east front of the Sierra Nevada mountains in California to the Wasatch Range east of Salt Lake City, north from Helena, Montana through Yellowstone, the Tetons, central and southern Idaho, Utah and virtually all of Nevada.

Basin and Range formation can be visualized by taking a loaf of sliced bread, setting it on the countertop and pushing on one end. As the slices fall over, they create triangular valleys between them with a single sharp mountain range on either side.  In this imperfect analogy, the slices represent fault lines in the blocks of crust. On one side of the fault, the blocks rise and on the other, they drop. Basins are the valleys and the ranges are the tops of the bread slices. In the real world, the basins eventually fill in with eroded material to become broad and flat.

How this came to be is the fascination of it. Geologists believe that about 17 million years ago, a giant meteor slammed into southeastern Oregon. This isn’t unprecedented. There is evidence in Mexico and India to name a few places, of other huge meteors impacting the earth. This meteor though, sent a shockwave through the earth’s crust and initiated a new era of mountain building in the Basin and Range Region.

Basin and range mountains are formed when the blocks on either side of the fault line shift in response to the impact. That they are all part of the same event is evidenced in their orientation. Almost all run roughly north to south. The oldest are in southeastern Oregon and Western Idaho, closest to where the meteor impacted.

When the blocks of mountains rise, the earth’s crust is pulled tight and begins to thin. It is estimated that if all the thinning were concentrated in one single fault it would divide the area with a fault at least as wide as the Red Sea.

As the Borah fault shift of 1983 shows, this process, which started 17 million years ago, is still occurring today. I have always prided myself on being able to take the long view, but I can’t get anywhere near being able to wrap my head around that.