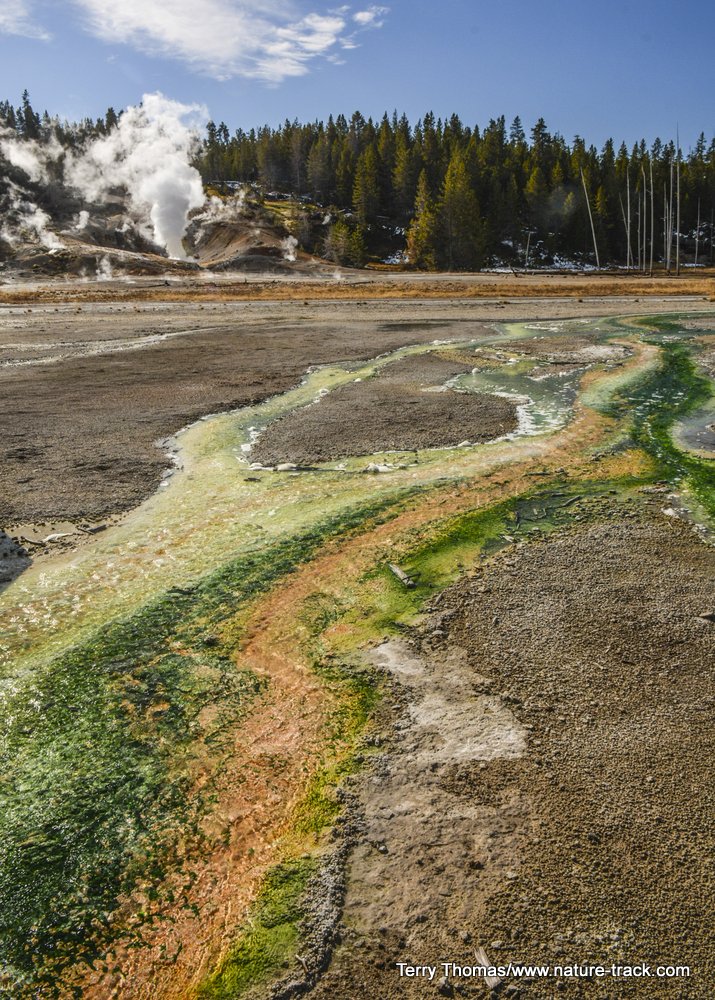 This extremely hot water in Norris Geyser Basin in Yellowstone National Park shows bands of heat-loving algaes and bacteria in the colorful bands on the bottom.

In the 1960’s, researchers believed that the limit of tolerance for heat-loving bacteria hovered around 131 degrees Fahrenheit (humans risk 3rd degree burns if exposed to water heated to 140 degrees Fahrenheit for two seconds). Fifty years ago, in 1969, scientists from Indiana University shocked the scientific world by discovering a bacteria which they named, Thermus aquaticus, in Mushroom Spring of Lower Geyser Basin in Yellowstone National Park that thrived at temperatures of 158 degrees Fahrenheit and could function up to 20 degrees hotter.

Thermus aquaticus further stunned the world by providing a heat-resistant enzyme, Taq DNA polymerase, which has become one of the most important enzymes in molecular biology because of its role in the polymerase chain reaction. This is a method of DNA amplification used replicate pieces of DNA for study (think DNA testing for criminal forensics and genome sequencing).

Since then, the study of extremophiles, organisms that live and/or thrive in extreme conditions, has become a mainstream science and the discoveries are nothing short of fantastic.

There are two broad categories of extremophiles. First, there are those that can tolerate extremes in the environment but grow optimally in more normal environmental conditions. Second, are organisms that actually require extreme conditions to thrive. Thermus aquaticus is one of the latter, requiring temperatures between 120- and 170-degrees Fahrenheit for survival. To them, these aren’t extremes.

Besides heat, scientists have found organisms surviving or thriving under almost every imaginable extreme that we normally consider completely unlivable. They are often classified according to the extreme condition that they tolerate or require, using the suffix, “phile”, which means, “loving”. For instance, acidophiles are acid loving. There are alkaliphiles (alkaline-loving), barophiles (living under extreme pressure like at the bottom of the ocean), halophiles (salt-loving), thermo and hyperthermophiles (heat-loving. The highest heat tolerance found to date is 252 degrees Fahrenheit), psychrophiles (organisms that grow best at low temperatures) and even radophiles, organisms that can stand up to 3,000 times the amount of radiation that would kill a human. Even more, many extremophiles are considered polyextremophiles, meaning that they can handle extremes in more than one area, for instance, heat and acid.

As the science progresses, researchers are finding that there are few places that some extremophile isn’t living, including in industrial solvents, and where they can survive by eating chemicals or minerals in processes reminiscent of photosynthesis.

Extremophiles include members of the three domains of life: archaea, bacteria and eukarya. There are some that are multi-cellular and even somewhat complex such as protozoa, algae, fungi, brine shrimp and tube worms. However, the vast majority are microorganisms, and most of those are archaea, the simplest forms of life.

This area of science continues to grow and attract some of the best minds because of the potential for discovery of systems humans can use to further our own future. For instance, researchers hope to one day unlock the secrets to radophiles and develop an “anti-radiation” pill for humans.

In addition, this knowledge is changing the way we look at life. Scientists are asking new questions and challenging just what, exactly, are the fundamental features of life. Have we been too narrowly defining life?

Finally, extremophiles give breath to the challenge of finding life on other planets within our solar system. If these creatures can survive in the depths of the ocean, in volcano vents, in blocks of sea ice, and deep underground on Earth, perhaps there are extremophiles on Mars too. They will likely take the form of single-celled organisms though, not little green men.